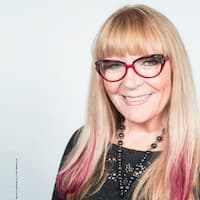 Ve Neill is a makeup artist from the United States. For the films Beetlejuice, Mrs. Doubtfire, and Ed Wood, she has received three Academy Awards. She has been nominated for a total of eight Academy Awards.

She is the judge at Face-Off and Cinema Makeup School. Ve is establishing a community of experienced makeup artists that are eager to learn and support one another in their careers as the Director of Education at Cinema Makeup School and a judge on Face Off. Mentoring, according to Ve, is all about ensuring that those who have a passion for beauty obtain the information they need and enter the industry in the appropriate mindset.

He went to trade school for fashion merchandising, and at 18 she owned a vintage clothing store in Los Angeles and made costumes for local rock ‘n’ roll bands. She learned how to do makeup from a person she met at a science fiction convention.

After learning that the men costumed as characters from Planet of the Apes built their own masks, Neill approached them at the same Sci-Fi conference where she met Fred Phillips. “But you’re a girl,” one of them said when she requested them to teach her. This incident became a part of her quest to learn everything she could and improve her abilities and tactics.

Neill attributes her success to self-teaching, with the help of other make-up artists who taught her tricks. She attributes her ability to progress as an artist to be the ability to study the great work of John Chambers and Fred Phillips. Because she was a woman and “they didn’t want me in there anyway,” there was a dearth of sharing between her and her male peers when she was honing her skills. She has also warned women, artists, in interviews that it is exceedingly difficult to juggle being married and having children while working in the business.

When did Ve Neill start her career?

Since she was five years old, Neill has wanted to be a make-up artist and create monsters, according to Neill. She was known as a child for painting her relatives’ faces with anything she had on hand, such as lipstick and shoe polish. Leo Lotito, a TV make-up artist who assisted her with her Halloween costumes, piqued her interest in the realm of makeup. At the age of 18, she went to a science-fiction conference in search of inspiration, which resulted in Fred Phillips taking her under his wing and landing her a job on Star Trek: The Motion Picture.

She has been nominated for eight Academy Awards and has won three of them. She’s worked on a number of films, including The Hunger Games, Pirates of the Caribbean, Mrs. Doubtfire, Beetlejuice, and Edward Scissorhands. She’s also the Director of Education at the Cinema Makeup School and has served as a judge on SYFY’s Face Off for nearly all 13 seasons. Ve took the time to give us a behind-the-scenes look at her illustrious career and share her thoughts on working in Hollywood.

Collaboration is one of Ve’s favorite parts of the application. She has the opportunity to collaborate with filmmakers to help them realize their vision and to assist performers in becoming their characters. Ve worked with Stephen Spielberg for six months to achieve the appropriate style for Jude Law’s character in A.I., changed Robin Williams into Mrs. Doubtfire, and worked directly with Johnny Depp to create Captain Jack Sparrow, putting her own collection of beads in his hair.

How much is Ve Neill worth?

he has an estimated net worth of $2 million.