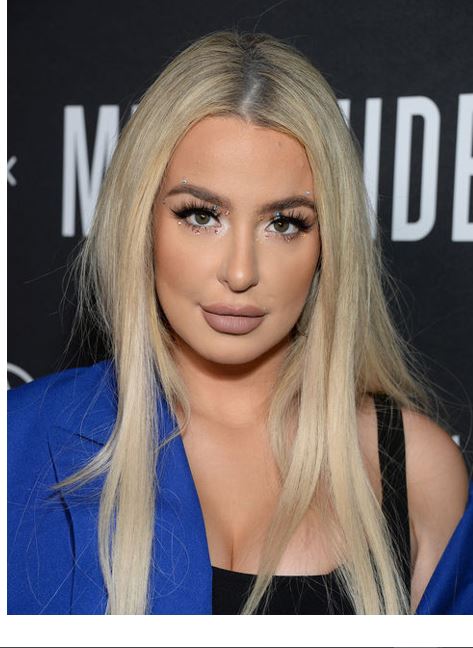 Tana Mongeau is an internet personality, model as well as a musician from the United States of America. She has also acted in several movies including Minute Match-Ups (2015), Escape the Night (2016), and Merry Christmas from Bella Thorne and Tana Mongeau (2018). As an internet personality, Tana is well known as a YouTuber with her “storytime” videos and other comedic videos.

With 5.4 million YouTube subscribers as of September 15, 2020, Tana has been regarded as one of the quickest adapting YouTubers after she managed to obtain over 2 million subscribers in just over a year’s time.

How old is Tana Mongeau? – Age

Who are Tana Mongeau Parents? – Father and mother

The internet sensation was born to Rick her father and Rebecca Mongeau her mother. She was raised in Las Vegas, Nevada by her both parents.  While on MTV No Filter: Tana Turns 21, She said that her parents lacked parenting skills which caused her to have a strained childhood.

Mongeau is openly bisexual. Mongeau was in a relationship with Bella Thorne from the summer of 2017 to February 2019. She dated Brad Sousa from February to April 2019 and afterward began dating Jake Paul. Later she announced on June 24, 2019, that she and Paul were engaged. The couple later wed on July 28, 2019, in a ceremony at the Graffiti Mansion in Las Vegas. Mongeau began dating Francesca Farago in July 2020. Prior to these relationships, she dated rapper Lil Xan.

The Internet sensation’s most famous videos are her “storytime” videos. On February 10, 2017, On February 10, 2017, She posted on her Snapchat that she was being investigated by the FBI after someone hacked into her emails and “sent a bombing and shooting threat to McCarran International Airport.

Mongeau posted a video on January 24, 2017, titled “The N Word” which has received over 7 million views. In the video, she describes an encounter where a person on her tour told her “say nigger”, in response to a tweet posted by Mongeau to iDubbbz, telling him to kill himself for his comedic use of “nigger” in his YouTube videos.

Later on February 17, 2017, She posted a video titled “An apology” in response to the iDubbbz drama which has received over 3 million views. Mongeau’s debut single, “Hefner”, was released in November 2017. The music video featured Bella Thorne. The same month, she was featured on an episode of Maury. She collaborated with Lil Phag and Dr. Woke on a song titled “Deadahh’ that was released her second solo single, “W”, on March 1, 2018. Then her third Solo single, “Fuck up”, was released on August 31, 2018.

The Internet sensation announced on May 26, 2018, she would be hosting her own convention, titled TanaCon, and intended to be an alternative to Vidcon after the VidCon 2017 organizers failed to give her the rights at the convention. TanaCon took place on June 22, 2018, and was canceled the same day. Over 80 creators were set to hold panels at the event. Despite Mongeau’s claims that 20,000 people tried to attend the convention, it was clear there were almost 4,000 to 5,000 who attended. It was reported many people were sunburned. The event had received much attention and criticism. She later apologized and said that refunds would be issued. TanaCon was organized in collaboration with Michael Weist.

It was announced on April 29, 2019, that Mongeau will be starring on her own MTV reality series titled MTV No Filter: Tana Turns 21 premiering in summer 2019. In May 2019, VidCon said that she would be a featured creator at the convention.

Tana Mongeau Net worth reportedly sits at $ 4 million, according to his net worth.