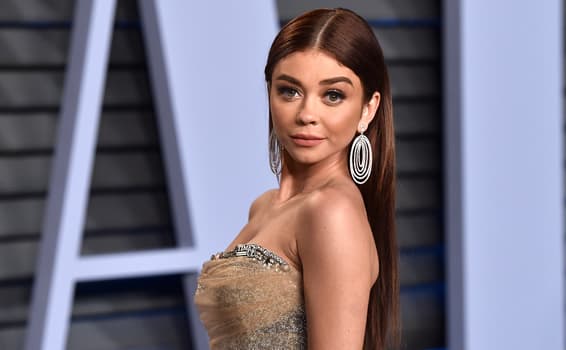 Sarah Hyland is an actress from the United States who is known for her role in the ABC hit show Modern Family as Haley Dunphy. Her Alma Mater is the Professional Performing Arts School from where she learned how to act. Upon completion of her studies, Hyland landed several minor roles in films such as Private Parts (1997), Blind Date (2007), and Annie (1999).

For her main role in Modern Family, Hyland has earned several awards as well as nominations for awards. They include a Critics’ Choice Television Award nomination for Best Supporting Actress in a Comedy Series and four Screen Actors Guild Award for Outstanding Performance by an Ensemble in a Comedy Series that she shares with her colleagues in the sitcom. Hyland’s character has also received lots of critical acclaim for her performances.

How old is Sarah Hyland? – Age

Sarah was born and raised in a family of two children of actor Edward James Hyland and actress Melissa Canaday. She has one sibling: a brother by the name Ian Hyland who is also an actor.

Hyland has kidney dysplasia, a condition she was diagnosed with as a child. In April 2012, her father donated a kidney to Sarah for her transplant. A few years later, the kidney failed and she needed another kidney transplant. In September 2017, her brother Ian donated his kidney to her.

Consequently, from her kidney dysplasia, Hyland has a challenge in maintaining weight and muscle mass. She has also been put on bed-rest several times. Since birth, she has undergone 16 surgeries to improve her health, including numerous kidney surgeries and laparoscopic surgery to treat her endometriosis.

Miss Hyland is engaged to Wells Adams, a radio DJ and ‘Bachelorette’ alum. The couple met on social media with Sarah having a crush on Adam. He appeared on The Bachelorette, Season 12 in 2016 and soon Hyland was tweeting about him. They began by online flirting and in October 2017, their relationship became official. Two years later, on July 16, 2019, Wells proposed to Hyland on a beachside. The two then announced the news on Instagram with photos of the moment.

Growing up in Manhattan, Hyland studied for acting at the Professional Performing Arts School in Manhattan. She then began acting professionally in 1997 with her first film role being in Private Parts as Howard Stern’s daughter. In 1999, she appeared in the musical comedy film “Annie” on a minor role as Molly and as Maddie Healy in Lipstick Jungle on NBC.

She featured in an Olive Garden commercial alongside actress Molly Culver and has also appeared on Broadway as the young Jacqueline Bouvier in Grey Gardens. She got a role on the ABC sitcom Modern Family, as Haley Dunphy, a character she has been playing since 2009. She and the rest of the cast won the Screen Actors Guild Award for Outstanding Performance by an Ensemble in a Comedy Series yearly from 2011 to 2014.

She co-starred in the Disney Channel Original Movie Geek Charming. In 2012, Hyland appeared in the film Struck by Lightning. In September 2012, it was announced that Hyland would be part of a Nintendo 3DS ad campaign. American actress Dianna Agron and gymnast Gabby Douglas were also part of the campaign.