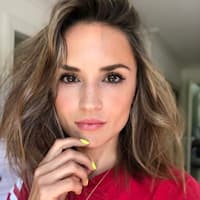 Rachael Leigh Cook is a model and actress from the United States. She has appeared in films such as The Baby-Sitters Club, She’s All That, and Josie and the Pussycats, as well as television shows such as Into the West and Perception. She also provided the voices for several characters in Robot Chicken and Tifa Lockhart in the Final Fantasy series, beginning with the English version of the film Final Fantasy VII: Advent Children.

Cook was born to Thomas Howard Cook, a former stand-up comedian and social worker, and JoAnn, a cookery instructor, and weaver. She is of Italian ancestry. Clara Barton Open School, Laurel Springs School, and Minneapolis South High School were all places she went.

Who is Rachael Leigh’s husband? – Wife

Cook began applying for acting roles when she was 14 years old. She made her acting debut in the 1995 film The Baby-Sitters Club. She also appeared in the adventure picture Tom and Huck, which was released in December 1995. Her modeling agency cast her in the short film 26 Summer Street in 1996. Cook starred in the 1997 film Country Justice as a 15-year-old rape victim who is impregnated by her rapist.

Cook made her breakthrough with the 1999 sleeper smash picture She’s All That, a romantic comedy that remains her most financially successful film to date. In the well-received The Bumblebee Flies Anyway, she co-starred with Elijah Wood. She played the lead in Josie and the Pussycats in 2001, which was a box office flop but has since become a cult favorite.

She was the cover girl for the March/April 2000 issue of FHM in the United States. She also appeared in the music video for New Found Glory’s “Dressed to Kill” in 2000. She was named No. 26 on Stuff magazine’s list of the “102 Sexiest Women in the World” in 2002. She played Cheri in the 2003 film 11:14. She also acted as a prominent cast member in Steven Spielberg’s 2005 television drama Into the West.

Cook provided the voice for Chelsea Cunningham on the Kids’ WB animated series Batman Beyond and in the animated film Batman Beyond: Return of the Joker. Cook voiced Tifa Lockhart in the video games Kingdom Hearts II, Dirge of Cerberus: Final Fantasy VII and Dissidia 012 Final Fantasy, as well as the CG movie Final Fantasy VII Advent Children. In 2011, she voiced the character of Jaesa Willsaam in the MMO game, Star Wars: The Old Republic. Cook’s latest voice-over role is for the video game Yakuza in which she voices the role of Reina. In 2020 Cook appeared in the fifteenth season of Criminal Minds playing the role of Max in the final episodes of the series.

She appears in the music video for Daniel Powter’s “Love You Lately” in 2006. Cook appeared in the 2007 film adaption of Nancy Drew. In the independent sports drama The Final Season, she plays the female lead. She has appeared in several episodes of Seth Green’s Titan Maximum and Robot Chicken. She appeared as Abigail Lytar in two third-season episodes of the USA Network series Psych in 2008. She returned to the role the following season.

Cook signed on to portray the female lead in Fox TV’s comedic pilot Nirvana in February 2010. She appeared in the Western horror film Vampire, directed by Japanese director Iwai Shunji in his English-language feature debut. Cook signed on to portray the female protagonist in the TNT criminal thriller series Perception, starring Eric McCormack, in 2012. Her husband, Daniel Gillies, directed her in the independent film Broken Kingdom. She also featured with Chad Michael Murray in a Funny or Die comedy.

In 2016, Cook starred in the Hallmark Channel original film Summer Love. Autumn in the Vineyard, a Hallmark film, was released the same year, followed by its sequel Summer in the Vineyard in 2017. Cook also developed, starred in, and executive produced the Hallmark Channel feature Frozen in Love, which aired in January 2018 as part of the channel’s ‘Winterfest’ programming season. Ben’s Sister Productions is Cook’s own production firm (in reference to her younger brother Ben Cook). Love, Guaranteed, which she produced and starred in, will premiere on Netflix on September 3, 2020.