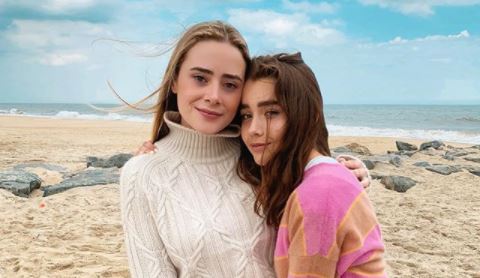 Naomi Biden is one of the grandchildren of America’s Presidential candidate Joe Biden and his wife Jill Biden. She is a strong supporter of her grandfather’s political career and often speaks up on issues affecting the country as well as those brought up to undermine Joe Biden’s campaign. This she does mostly through her Twitter account. Naomi’s social media outspokenness has arguably made her the most prominent of the Biden grandchildren.

How old is Naomi Biden? – Age

Who are Naomi Biden’s Parents? – Siblings

Naomi is one of the three daughters born to Hunter Biden and his first wife Kathleen Buhle. Naomi is the eldest of her siblings: sisters Maisy Biden and Finnegan Biden. Her birth name is Naomi Christina Biden and she was named so after her late aunt, Joe Biden’s first daughter who passed on in a 1972 tragic accident alongside her mother.

Is Naomi Biden still in College?

Yes, Naomi is a student at Columbia Law School in New York City where she is studying for her J.D.

Who is Naomi Biden Dating? – Boyfriend

The law student is said to be dating a fellow law student by the name Peter Neal. Together they created a quiz website that makes it possible for people to find out whether they qualify to receive aid on the CARES Act.

Speaking about the formation of the website, the couple revealed that it took about 48 hours to fully go through 335 pages of content on the Act, come up with the quiz and code the website. This they say is their way of doing their part to help during the Coronavirus pandemic.

Following in the footsteps of her grandfather, Naomi is a Democrat and is not shy to voice her opinions on matters politics. She is an avid supporter of her grandad, Joe Biden, and has often tweeted in support of him urging people to vote for him. When Joe was America’s Vice President, Naomi would be seen on some of his official tours to foreign countries such as China, New Zealand, Turkey and many more.

Who are Joe Biden’s Children and Grandchildren?

Born as Joseph Robinette Biden Jr., the 47th Vice President of the United States of America is a father of 4 kids with only two of them still surviving as of 2020.

The first child was his son Joseph R. “Beau” Biden III, the 44th attorney general of Delaware from 2007 until 2015 when he succumbed to brain cancer. Beau was married to Hallie Olivere Biden and together they had two children.

The second Biden child is also a son by the name Robert Hunter Biden. Hunter is the founder of Eudora Capital, a venture capital firm as well as an attorney working with a New York-based law firm. Hunter has been married twice with his first marriage leading to the birth of his first three children and daughters. He is said to be the father of another child (their identity is anonymous) with a lady called Lunden Alexis Roberts and another child with his now wife Melissa Cohen.

The third child was Joe’s first daughter with his first wife Neilia Hunter. While out shopping with her mother and brothers for the holidays in 1972, the family was involved in a horrible car accident that took the lives of both Naomi (a toddler) and Neilia, leaving the boys terribly hurt but luckily they survived.

The fourth child is the youngest and second daughter of Joe and his wife Jill Biden. She is known as Ashley Blazer Biden and is a former executive director of the Delaware Center for Justice, a nonprofit advocacy group. She also runs ‘Livelihood,’ a charitable clothing line.

Joe Biden and his wife Jill Biden are grandparents to seven grandkids: