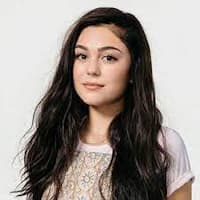 Mika Abdalla is a film and television actress from the United States who gained fame for her roles in the Emmy-nominated Netflix original series, Project MC2 in 2015 and in the 2022 American teen sex comedy film Sex Appeal.

How old is Mika Abdalla? – Age

She is the daughter of George Abdalla and Pam Rene Abdalla. Her ancestors came from Lebanon, Bulgaria, Greece, and Italy. Mika is very proud of all of the cultures that make up her identity, and she is also a very proud Texan. She enrolled at UCLA and is studying film.

She is in a relationship with Nicholas Stevens.

She appeared as Avery in the 2022 American teen sex comedy film Sex Appeal. Avery Hansen-White restrains herself from doing things she isn’t particularly good at. So, when her long-distance boyfriend appears to be interested in taking their relationship to the next level at the upcoming STEM conference (“nerd prom”), she resolves to master her sexuality. Avery begins researching the mechanics of love and discovers that relationships require less science and more heart.

She portrayed Tinya Wazzo, the daughter of Renee Wazzo and a meta-human from Coast City in The Flash. Iris West-Allen and Sue Dearbon confronted Tinya. Tinya walked away after destroying Iris’ phone, which they had used to track her down. Later that day, she went to her mother’s last known address, where Iris and Sue awaited her, and offered to assist Tinya in her search for her mother. They then retired to a luxury hotel for the night.

Tinya, Iris, and Sue visit the adoption agency that handled Tinya’s adoption, but they are unable to provide any information about the birth mother. Tinya was stealing food at Jitters when she was approached by Barry Allen, who asked for her assistance in finding Iris.

Weather Witch, Girder, Dr. Polaris, and Psycho Pirate escaped from their cells while Tinya was training her powers at A.R.G.U.S. with the help of Cisco Ramon and Kamilla Hwang. Tinya was able to trap them once more, but they soon realized that Bloodwork had escaped.