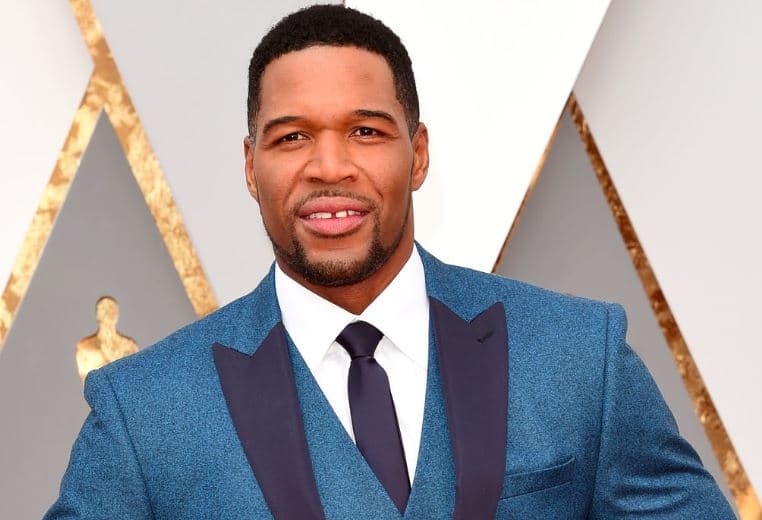 Michael Strahan is an ABC/Fox television host and former NFL football player with a career that spanned for 15 years, retiring in 2008. As a television personality, Strahan is known for co-hosting the Good Morning America show on ABC, it’s spinoff  ‘Strahan, Sara and Keke’ as well as for appearing on Fox NFL Sunday and Fox NFL Thursday as a football analyst.

How old is Michael Strahan? – Age

He is the sixth and youngest child of Gene Willie Strahan and Louise Strahan also formerly known as Traylor. His dad is a retired boxer and Army Major while his mom is a basketball coach.

Michael is related to Arthur Strahan, the retired professional football player, who is his uncle. Arthur also played defensive end while at Texas Southern University before making it his career later on in life.

As of 2020, the Fox NFL Sunday football analyst is not married. However, he has been married twice and engaged to be married for the third time. His first wife is known as Wanda Hutchins. The two were in a relationship and married from 1992 to 1996 when they got a divorce. The marriage resulted to the birth of their two children. Despite the end their time together, Michael bought a house in Houston where his parents live and moved his first family there.

From 1999 to July 20, 2006, Michael was married to Jean Muggli whom he had met at a spa in the late 90s. From this marriage, Strahan got two more children. The former couple’s divorce was settled at $15 million being awarded to Muggli and $18,000 monthly child support which Strahan appealed. The court then ordered of their Montclair mansion that was valued at $3.6 million to be auctioned and the money split evenly.

Strahan moved on and met Nicole Mitchell, Eddie Murphy’s ex-wife. The two began a relationship and in August 2009, they became engaged. However, in 2014, the engagement was called off.

Michael is a father of four children from his two marriages. His first child and daughter is Tanita Strahan while his second child and only son of Michael Anthony Strahan Jr. His 3rd and 4th children are twin daughters Isabella Strahan and Sophia Strahan.

On Fox as a NFL games analyst

On ABC – Is Michael Strahan still on GMA?

On October 1, 2010, he sat in for the late Regis Philbin on the Live! with Regis and Kelly. When Philbin left the show in late 2011, the show had an empty spot for sometime and on September 4, 2012, it was announced that Michael would be joining Kelly Ripa in co-hosting the show. It was rechristened to ‘Live! with Kelly and Michael,’ a syndicated daytime talk show that aired from 2012 to 2016. Shortly after Michael joined the show, it’s ratings grew massively. He remained on the show until April 19, 2016 when ABC made an announcement that Michael would be joining ‘Good Morning America’ full-time and essentially leaving ‘Live! with Kelly and Michael’.

Strahan had been a contributing anchor on GMA since his confirmation on April 15, 2014. On September 6, 2016, he officially joined the show as a co-anchor alongside Robin Roberts, George Stephanopoulos, and Lara Spencer. He is part of the first hour segment that focuses on the news of the morning with Roberts and Stephanopulos. He again co-anchors the second hour segment with his first-hour co-anchors and an addition of Spencer, in-front of a live studio audience also featuring guests and talk show panel discussions.

Strahan has also been a co-host of yet another ABC show known as Strahan, Sara and Keke, since 2018. It is a spinoff of Good Morning America, originally called GMA Day. He began co-hosting the show alongside Sara Haines and in January 2019 it was renamed Strahan and Sara and when Keke Palmer joined, it was retitled to Strahan, Sara and Keke.

Before joining the media industry, Strahan used to play football professionally. He played in the position of defensive end with the New York Giants for his entire career. Being with the New York Giants meant that Strahan could play in the National Football League, which he did. His career in football began when he was sent to live with his uncle, Arthur Strahan, so that he could attend Westbury High School. He took up the sport for one season an it earned him a scholarship to Texas Southern University.

At TSU, Michael use to draw double teams which in turn made him so dominant. He grew interest in joining the NFL and gradually began to turn himself into an NFL prospect. He was then drafted into the NFL as a senior. In 1993, the New York Giants drafted him but got to play in only six games, missing out on two playoff games that season due to injuries. He remained with the team until June 9, 2008 when he announced his retirement from the NFL. He played with the No. 92 jersey which he also revealed is planned to be retired by the Giants.

♦  While co-hosting ‘Live! with Kelly and Michael,’ Strahan won the Daytime Emmy award twice for Outstanding Talk Show Host.
♦  In 2014, Strahan was inducted into the Pro Football Hall of Fame
♦  In 2001 and 2003, Strahan was named the NFC Defensive Player of the Year
♦  In 2001, he broke the NFL Single-season Sack Record

What is Michael Strahan’s Net Worth?

Strahan’s actual net worth has not been made public from a reputable source. However, his net worth is estimated in millions of US dollars, about 65 million or more.