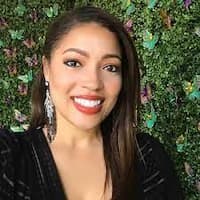 Kontji Anthony is a journalist from the United States working at WMC Action News 5, NBC in Memphis, Tennessee as an Evening News Anchor. She joined the station in July 2005.

How old is Kontji Anthony? – Age

She was born in New Rochelle, New York, in the United States. Her date and month of birth are not revealed.

Kontji holds a bachelor’s degree in communications from Howard University and is a member of the Alpha Kappa Alpha Sorority, Incorporated, the National Association of Black Journalists, and the National Academy of Television Arts and Sciences.

Who is Kontji Anthony married to? – Husband

Anthony is married to Patrick Hendricks. The couple wedded on 4 July 2015 in a wedding ceremony that was attended by close friends and relatives in Memphis, Tennessee.

She earns an annual salary of $200 thousand.

Kontji began her broadcasting career as a host for her high school television station when she was 17 years old. She has worked for television news stations around the country, both behind and in front of the camera. Kontji began his career in television news as an assignment desk assistant and field producer for WCBS in New York, New York. Her first employment as a television reporter was at KTVO-TV in Kirksville, Missouri, where she videotaped and edited her own stories.

Kontji then got a position as a reporter/anchor at KBAK-TV in Bakersfield, California. Her second employment in broadcasting was as a general assignment news correspondent for Good Day Sacramento, where she also wrote for The Stockton Record newspaper. Kontji was the morning and noon anchor at WNCT-TV in Greenville, North Carolina, where she also worked as a radio news commentator and hosted the local DIY Network home renovation show “Do It Yourself Eastern Carolina” before joining WMC-TV.