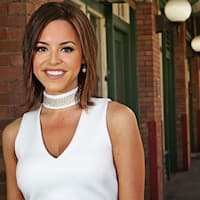 Who is Kelly Sasso? – Biography

Kelly Sasso is a Journalist from the United States of America working as the co-anchor of the 4 p.m. newscast weekdays on Pittsburgh’s Action News 4. She joined the station in April 2017.

How old is Kelly Sasso? – Age

She was born and raised in western Pennsylvania. Her date of birth is not known.

In 2005, she graduated from Hempfield High School. She studied Broadcast Journalism at Point Park University in downtown Pittsburgh and graduated with a bachelor’s degree. During her undergraduate vacations, she worked at the Walt Disney World Resort in Orlando, where she performed in shows and parades as well-known fairy-tale princesses from stories.

Who is Kelly Sasso Married to? – Family

Kelly is married to her high school sweetheart Nicholas Sasso and clearly enjoys a passionate relationship with him. She frequently updates her social media sites with photos of herself and her companion.

She got sick and lost a lot of weight. Her Doctor told her that the medication may take a little while to work. Speaking on her Facebook page, she said that she was still waiting on the results from her upper endoscopy biopsies which may give more answers. She was given an all-alkaline diet and extra rest. She has been suffering from GERD, Hiatal hernias, or other digestive issues.

Kelly worked for 40/29 News, a Hearst Television station in Fayetteville, Ark., in a variety of capacities before joining WTAE, most notably as a prime-time anchor. She won multiple Associated Press honors for special initiatives and newscasts while at 40/29 News.