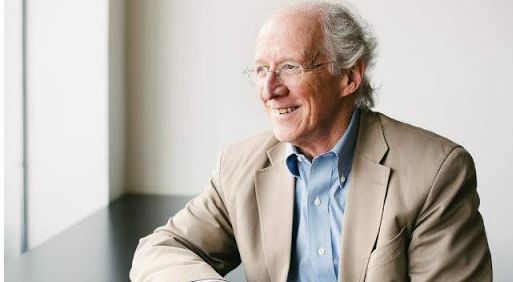 John Piper born in Chattanooga, Tennessee, the US as John Stephen Piper is the author, co-founder/headteacher of desiringGod.org, and the leader of Bethlehem College & Seminary.

Piper was a teacher of Biblical Studies at Bethel University for six years from the year 1974 to 1980. He then ministered for 33 years at Bethlehem Baptist Church in Minneapolis, Minnesota, as Pastor for Preaching and Vision.

John is the son of the late Bill Piper, a former a traveling evangelist and church planter, and the late Ruth Piper. He has an elder sister, Beverly Piper. His mother Ruth, died in a bus wreck in Israel on December 16, 1974. His 1990 booklet What’s the Difference? includes her tribute. His father died on March 6, 2007.

John is married to Noël Henry, the author of Treasuring God in Our Traditions and Faithful Women and Their Extraordinary God. The couple married in December 1968. tHey together have five children; four sons, Barnabas Piper born on 31 March 1983, Benjamin Piper, Karsten Pipe, Abraham Piper, and Talitha Piper. They also have 12 grandchildren.

He studied at Wade Hampton High School. Piper then joined Wheaton College in 1964 and graduated in 1968 in literature and in philosophy. He attended the University of Munich, Germany in 1971 and graduated in 1974 under Leonhard Goppelt with a Doctor of Theology degree in New Testament Studies.

Piper announced on January 11, 2006, that he had been diagnosed with prostate cancer. Through a letter, he together with his doctors assured his church that the cancer was fully treatable. He had surgery on February 14, 2006, which was successful.

• Love Your Enemies: Jesus’ Love Command in the Synoptic Gospels and the Early Christian Paraenesis
• The Justification of God: An Exegetical and Theological Study of Romans 9:1–23 Desiring God: Meditations of a Christian Hedonist
• The Supremacy of God in Preaching
• The Pleasures of God
• Recovering Biblical Manhood and Womanhood
• Let the Nations Be Glad! The Supremacy of God in Missions
• Future Grace: The Purifying Power of Living By Faith In Future Grace
• A Hunger for God: Desiring God Through Fasting and Prayer

• A Godward Life: Savoring the Supremacy of God in All of Life
• God’s Passion for His Glory: Living the Vision of Jonathan Edwards
• The Innkeeper
• A Godward Life, Book Two: Savoring the Supremacy of God in All of Life
• The Legacy of Sovereign Joy: God’s Triumphant Grace in the Lives of Augustine, Luther, and Calvin
• The Hidden Smile of God: The Fruit of Affliction in the Lives of John Bunyan, William Cowper, and David Brainerd
• Seeing and Savoring Jesus Christ
• The Dangerous Duty of Delight: Daring to Make God the Object of Your Desire
• What’s the Difference?: Manhood and Womanhood Defined According to the Bible
• The Misery of Job and the Mercy of God
• Brothers, We Are Not Professionals: A Plea to Pastors for Radical Ministry
• Counted Righteous in Christ: Should We Abandon the Imputation of Christ’s Righteousness?
• Beyond the Bounds
• Don’t Waste Your Life
• Pierced By the Word: Thirty-One Meditations for Your Soul
• The Prodigal’s Sister
• The Passion of Jesus Christ
• When I Don’t Desire God: How to Fight for Joy
• Life As a Vapor
• A God Entranced Vision of All Things
• Sex and the Supremacy of Christ
• Taste and See: Savoring the Supremacy of God in All of Life
• God is the Gospel: Meditations on God’s Love as the Gift of Himself
• Contending for Our All: Defending Truth and Treasuring Christ in the Lives of Athanasius, John Owen, and J. Gresham Machen
• Fifty Reasons Why Jesus Came to Die
• Suffering and the Sovereignty of God
• What Jesus Demands from the World