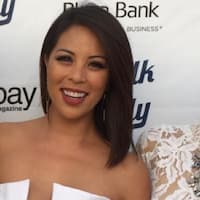 Cher Calvin is a journalist from the United States working as an anchor of the award-winning KTLA 5 News at 6, 6:30, 10, and 11 on weeknights.

How old is Cher Calvin? – Age

She is the daughter of Roger Calvin, a former Filipino actor. In 1992, she graduated from the Marymount School of New York, a Catholic college preparatory high school for girls on Manhattan’s Upper East Side. She has a BA in broadcast journalism and a minor in political science from New York University.

Calvin is of Filipino ancestry. She is bilingual (English and Tagalog) and attends a variety of Filipino, Asian, and KTLA-sponsored public community activities. She took part in the Center for the Pacific Asian Family’s Vagina Monologues to help end violence against women around the world.

Did Cher Calvin get married? – Husband

She is married to Aki Oshima. The couple married in 2020 in Los Angeles, California. Sister Regina, a nun Calvin had known since childhood, surprised the bride in the bridal room with a special message. Calvin danced to Bruno Mars with her groom, who was dressed in a Tom Ford suit and Gucci shoes, as they entered the celebration, wearing her mother’s vintage veil and a Lian Rokman couture dress.

She has an estimated net worth of $ 2 million.

Cher previously co-anchored the Saturday evening news and KTLA’s morning show, for which she received an Emmy in 2005. She’s also won three Golden Mike Awards: two for “Access L.A.,” the best public affairs program, and one for “KTLA 5 Morning News.” Cher came to KTLA from KVVU-TV, a Fox affiliate in Las Vegas, where she co-anchored “Fox 5 News This Morning.”

Her on-camera career began while she was living in Manila, Philippines, from 1998 to 2003. Cher worked as a news anchor and features reporter for GMA Network at the time, and later as a news anchor for ABS-CBN, a CNN Asia affiliate and national network. Cher was the national evening news anchor for ABS-“News CBN’s Central,” winning the Golden Dove Award for best newscast – the Philippines’ equivalent of an Emmy Award. Cher also won the Philippines Star Award for best lifestyle host in 2002 for her four-year co-production and hosting of the lifestyle magazine show “F.” Cher was also hosting “Points of View,” a weekly political roundtable talk show on ABS-CBN, for which she got two Golden Dove Awards in 2000 and 2002.

Cher is a representative and annual master of ceremonies for the charity Asians for Miracle Marrow Matches, believing it is important to give back to her community. She’s also taken part in “The Vagina Monologues,” a global campaign to end violence against women. Cher speaks Tagalog and attends many Filipino and Asian community events, including the annual Lotus Festival in Echo Park, which is sponsored by KTLA. She began her career in journalism as a news desk assistant editor for Time magazine in New York. She graduated from New York University with a BA in broadcast journalism and a minor in political science.