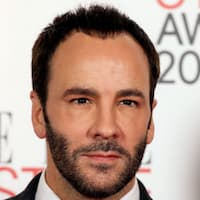 Tom Ford is a fashion designer and filmmaker from the United States. He founded his eponymous luxury label in 2005, after working as the creative director of Gucci and Yves Saint Laurent. He is the chairman of the Council of Fashion Designers of America’s Board of Directors.

He is the son of Shirley Burton (née Shirley Ann Thrasher) and Thomas David Ford, both realtors. He grew up in the Houston suburbs and San Marcos, Texas, just outside Austin. At the age of six, he rearranged the furniture in the house and gave his mother feedback on her hair and shoes. When he was 11, his family relocated to Santa Fe, New Mexico. In Santa Fe, he attended St. Michael’s High School before transferring to Santa Fe Preparatory School, where he graduated in 1979.

He enrolled in Bard College at Simon’s Rock at the age of 16, but dropped out soon after. He relocated to New York City to pursue a degree in art history at New York University (NYU). He met Ian Falconer there, who introduced him to Studio 54 for the first time. Ford left after a year to pursue a career in television commercials.

He kept going to Studio 54, where he discovered he was gay. He was married to the late journalist Richard Buckley. The couple married in 2014 until his death in 2021.

In 1990, Ford was hired as the chief women’s ready-to-wear designer by the Italian fashion house Gucci. During the early 1990s, he worked eighteen-hour days to design the brand’s eleven product lines. During this time, there were creative disagreements between Ford and Maurizio Gucci, the company’s chairman and 50% owner. Ford’s contributions to Gucci were overshadowed by Dawn Mello, the company’s public face. Domenico De Sole wanted to fire Ford, but he was persuaded to stay.

Ford was appointed Creative Director of Gucci in 1994. He introduced Halston-style velvet hipsters, skinny satin shirts, and car-finish metallic patent boots in his first year as CEO. Ford was able to reintroduce the traditional fashion house into the mainstream. Ford parted ways with the Gucci group in 2004 after he and CEO Domenico de Sole were unable to reach an agreement with Pinault Printemps Redoute’s boss over control of the Group. Ford released an eponymous monograph in 2004, detailing his early career and design work for Gucci and Yves Saint Laurent from 1990 to 2004

He has an estimated net worth of  $500 Million.

Ford was attached to direct Nocturnal Animals, an adaptation of Austin Wright’s novel Tony and Susan, in 2015. In 2016, the film was released. Tony and Susan were played by Jake Gyllenhaal and Amy Adams, with Michael Shannon, Armie Hammer, Aaron Taylor-Johnson, and Isla Fisher also appearing.

The film received positive reviews from critics and was awarded the Grand Jury Prize at the Venice Film Festival. Based on 143 reviews, the film has a 72 percent approval rating on Rotten Tomatoes, with an average rating of 7.1/10, and the site’s critical consensus reads: “Well-acted and lovely to look at, Nocturnal Animals further underscores writer-director Tom Ford’s distinctive visual and narrative skill.”

Ford announced the formation of his film production company, Fade to Black, in March 2005. In 2009, he made his directorial debut with A Single Man, based on Christopher Isherwood’s novel of the same name. Colin Firth stars as a gay college professor in Los Angeles, alongside Julianne Moore, Nicholas Hoult, and Matthew Goode.