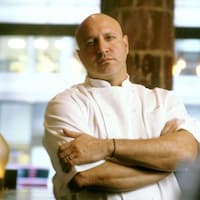 Tom Colicchio is a well-known American chef. He co-founded the Gramercy Tavern in New York City, where he previously worked as a co-owner and executive chef. Crafted Hospitality, which includes Craft, Riverpark, Temple Court, Craftsteak, Heritage Steak, and Small Batch restaurants, is also founded by him.

How old is Tom Colicchio? – Age

Colicchio was born as the son of Beverly (née Corvelli) and Thomas Colicchio. His father worked as a labor organizer. On both sides, he is of Italian descent. He graduated from Elizabeth High School in 1980.

Who is Tom Colicchio married? – Wife

He is married to Lori Silverbush, who is a filmmaker. The couple married in 2001. He has three sons: Dante Colicchio, born in 1993, his child with an ex-girlfriend, and his two children with Silverbush, Luka Bodhi, born in 2009, and Mateo Lev born in 2011.

He has an estimated net worth of  $20 Million.

How many Michelin stars does Tom Colicchio have?

Tom does not have a Michelin star, but he has 5 James Beard Foundation Awards and is a well-known chef. While the two shows have different concepts, the basic premise is the same: aspiring chefs compete in a variety of challenges to win a large culinary prize.

Colicchio’s Heritage Steak at The Mirage brings his passion for cooking with fire to the Las Vegas Strip. The 250-seat restaurant, which opened in August 2013, focuses on meats prepared entirely over an open flame – from wood-burning ovens to charcoal grills.

Colicchio opened Craft one block south of Gramercy Tavern in 2001. Soon after, The New York Times awarded Craft three stars, calling it a “vision of food heaven.” In 2002, Craft received The James Beard Foundation Award for “Best New Restaurant.” That same year, he was named “Chef of the Year” by The Bon Appétit American Food and Entertaining Awards. The New York Times revisited Craft in September 2011, ten years after its debut, upholding its three stars and stating that the restaurant is “as magical and delicious as it was when it opened.”

He opened Colicchio & Sons in New York in January 2010. At Colicchio & Sons, he improvises with small-batch ingredients sourced from micro-producers and family farmers with whom he has worked for decades. The New York Times awarded the restaurant three stars. Colicchio later that year opened Riverpark in New York with chef and partner Sisha Ortuzar. Riverpark offers views of the East River as well as an urban farm that supplies produce to the restaurant. Colicchio received The James Beard Foundation’s coveted “Outstanding Chef” award in May of the same year, capping off his 30 years of hard work in the restaurant industry.

In the fall of 2012, he opened the restaurant at Topping Rose House, a new inn he owns in Bridgehampton, New York, which officially opened in 2013.  In the future, Tom plans to open a restaurant at 1 Hotel & Homes South Beach featuring a Mediterranean-inspired menu highlighting South Florida’s local farms and fishermen. Tom and his restaurants support local charities such as Children of Bellevue, City Harvest, Alex’s Lemonade Foundation, United Way of New York, and Food Bank for New York City.