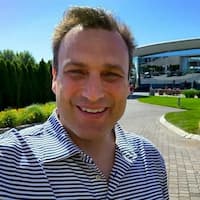 Steve Overmyer is a journalist from the United States working as the sports anchor and reporter and the host of Sports Update every weekend on CBS2 and WLNY 10/55.

How old is Steve Overmyer? – Age

He was born in Indiana, Overmyer, in the United States. His age is not known.

Overmyer graduated with a bachelor’s degree in journalism from Vincennes University.

He was married to Tracye Hutchins, an American journalist. The pair married in 2001, but after three years of marriage, they split in 2003 and divorced the following year. He’s also said to be dating Rudi Bakhtiar.

Paige, Steve’s daughter with ex-wife Tracye Hutchins, is almost 23 years old as of 2021. In his spare time, he enjoys spending time with her. Paige began her college career in September of 2016.

Overmyer previously worked for SportsNet in New York as an anchor and reporter (SNY). He worked as a field reporter for Jets Post Game Live and as a studio host for Mike Tannenbaum’s 1st and Goal. Overmyer served in a variety of roles at SNY, including anchoring the nightly highlight show, hosting chat shows, and serving as a field reporter for all New York teams. Overmyer spent five years as a sports anchor at CNN in Atlanta before moving to New York in 2006. He was the host of the award-winning NFL Sunday Night Blitz and a CNN Headline News evening sports anchor.

From 1997 until 2001, Overmyer worked as a reporter for KPNX-TV, an NBC affiliate in Phoenix, Arizona, covering a variety of professional sports teams, including the Arizona Cardinals, Phoenix Suns, and Arizona Diamondbacks.

Overmyer got his start as a sports director at WBBH-TV in Fort Myers, Florida, where he won the Associated Press Florida Sportscaster of the Year Award. Since then, he’s established himself as a top sports journalist, covering events like the Giants’ Super Bowl victories in 2007 and 2012, the Yankees’ World Series victory in 2009, and Derek Jeter’s farewell game at Yankee Stadium. Overmyer is involved in the community, working with organizations such as the Muscular Dystrophy Association, Hartley House, and the Stephen A. Siller Tunnel 2 Towers Foundation in New York.