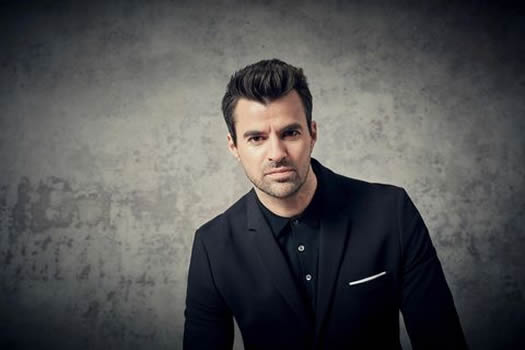 Steve Jones is a renown television presenter from Wales and works for Channel 4 F1 as the presenting team’s leader. Jones is best known for his time as a presenter of Channel 4’s former teen schedule T4. He is also known in his country of residence, the United States of America, as the host of the first season of The X Factor USA.

Jones is 43 years old as of March 16, 2020 and his birth name is Stephen Ashton Jones. He was born in the year 1977 in Tylorstown, Rhondda Cynon Taff, Wales.

Where does Steve Jones live?

Steve Jones is married to American model Phylicia Jackson. The two met back in 2011 when Jones was a presenter on The X Factor USA and got married in October 2014 at Mayfair Library in Central London in a low-key ceremony. Prior to his relationship with Jackson, Steve had dated Pamela Anderson, Alex Jones, Fearne Cotton and Hayden Panettiere.

Jones got into the limelight in 2003 as he modeled for Esquire. He later left his modeling career and began presenting in such programmes as 99 Things To Do Before You Die and The Pop Factory Awards with Liz Fuller. Jones’ next job was on Channel 4 as a regular feature on T4, it’s weekend entertainment programme. In 2006, he worked on Transmission with T-Mobile with XFM DJ Lauren Laverne.

In February 2009, Jones made his BBC One debut hosting Let’s Dance for Comic Relief with Claudia Winkleman, who was later replaced by Alex Jones. In early 2009, Jones presented Sky1’s Guinness World Records Smashed with Konnie Huq. The same year, Jones began presenting the BBC TV quizshow As Seen On TV. He also presented 101 Ways to Leave a Gameshow for the channel, which aired in July 2010.

In August 2009 and September 2013, Jones sat in for Janice Long on BBC Radio 2. Jones has also been involved in acting. He had a small part in the film Angus, Thongs and Perfect Snogging and a minor role as himself in two episodes of the TV series Plus One. In 2010, he had a small role in the film It’s a Wonderful Afterlife.

For the Summer/Autumn ranges of Shop Direct Group’s in-house brand ‘Good Souls’, in 2010, Jones designed and modeled clothing. On 22nd October 2010, it was announced Jones would leave T4 after seven years as a presenter. His last show for the strand was T4 Stars Of 2010 on 21 November 2010.

In 2010, Jones presented a new game show, Drop Zone, on BBC One, in which eight teams faced a series of physical and mental challenges in six of the world’s most exciting locations. In May 2011, it was originally announced that Jones would co-host The X Factor USA with actress Nicole Scherzinger. However, Scherzinger was later promoted to the empty judge slot vacated by Cheryl Cole, and Jones was slated to present the show solo. In between filming the X Factor USA season one in Los Angeles, Jones appeared as a guest on The Ellen DeGeneres Show, where he talked about being a model, life in Los Angeles and working on The X Factor USA.

In December 2011, he presented a live music special on ITV known as A Night with Beyoncé. In January 2012, Jones announced that he had been dropped as presenter of The X Factor USA. Later on and after much speculation, the show’s creator Simon Cowell stated that many changes would be made to the show for the second season. Season one judges Paula Abdul and Nicole Scherzinger were also dropped from the show.

In February 2012, Jones hosted Let’s Dance for Sport Relief for the BBC in 2012 for the fourth series of the fundraising show. Jones said in a statement “The BBC, Let’s Dance, and Alex Jones…three of my favorite things. I couldn’t ask for a better show to come home to… I can’t wait!”.

He presented the BBC Three reality show Hair in 2014. The programme was renewed for a second series in 2015, moving to BBC Two. For the second series, Jones was replaced by comedian Katherine Ryan. Still, in 2011, Jones was a co-presenter on two series of the Channel 4 cookery show Weekend Kitchen with Waitrose alongside Lisa Snowdon. The show aired every Saturday morning.

In March 2016, he was announced as the lead anchor of the Formula One coverage on Channel 4. His job entails presenting live races and highlight shows. In 2017, he co-presented Animal Rescue Live: Supervet Special for Channel 4 with Noel Fitzpatrick.