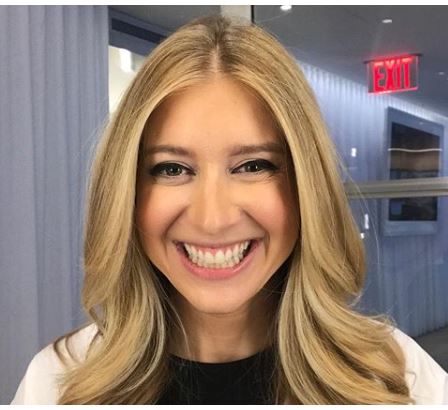 Sara Eisen is a journalist, reporter, and television broadcaster who is best known for being the co-anchor of CNBC’s “Worldwide Exchange.” She is also well-known for her work as a Bloomberg Television and Radio journalist.

How old is Sara Eisen? – Age

Where did Sara Eisen go to school? – Education

Sara attended Northwestern University’s Medill School of Journalism for her schooling. She attended the University of New York after matriculation and earned a Bachelor of Arts degree in Television Reporting and Business Coverage. Sara also attended Camp Ramah, a Jewish summer camp, alongside other famous personalities including the former US Federal Reserve chairman Ben Bernanke, television reporters Wolf Blitzer and Jake Tapper, and businessman Michael Dell. Later, at some point, she spent two years there working as an aerobics instructor.

Sara grew up in Cincinnati, where she was reared by her father, Dr. Drore Eisen, a dermatologist who founded CDx Diagnostics and served as the company’s medical director, and her mother, Dr. Jane Eisen, a pediatric dentist. In the media, there is still no information regarding any siblings.

Eisen is married to Matthew Levine, the former head of Bloomberg Television’s US programming. They have two children together.
Eisen is a member of Room to Read’s regional board in New York.

What is Eisen Salary?

Eisen’s net worth is $1 million.

Eisen worked for Bloomberg Television as a radio host for Bloomberg Surveillance and then as a television co-anchor for Bloomberg Surveillance. CNBC engaged her to co-host Worldwide Exchange and Squawk on the Street in 2013. On March 12, 2018, Brian Sullivan took over as anchor of Worldwide Exchange from Eisen (and co-anchor Wilfred Frost). Eisen took over Power Lunch from Sullivan until November 29, 2018, when Eisen and Frost resumed co-anchoring Closing Bell. Until June 22, 2020, she was a co-anchor of Squawk on the Street.