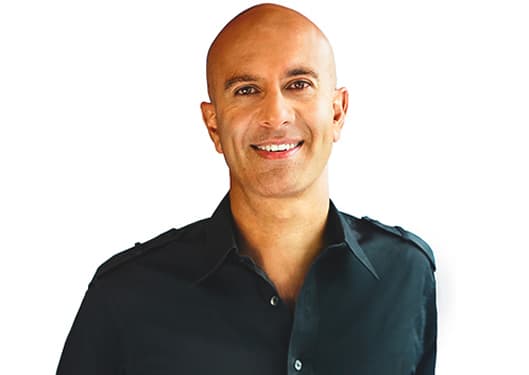 Robin Sharma is a former lawyer turned book author from Canada who is well known for his “The Monk Who Sold His Ferrari” book series. He is a speaker on Leadership and Personal Mastery and has often been invited by top organizations like Nike, YPO, GE, FedEx, Microsoft, PwC, HP, Oracle, Yale University and NASA, to present in their most important events.

How old is Robin Sharma? – Age

Born in Uganda, Robin is the son of Shiv Sharma, a physician and his wife Shashi Sharma, a teacher. The family lived in Uganda at the time and relocated to Hawkesbury, Canada on his first birthday.

He has always loved reading books since he was a young boy. He topped in his high school education and proceeded to Dalhousie University, Canada where he undertook a law degree and Masters of Law, graduating in 1991.

Sharma was married to Alka Sharma. The couple divorced as he led an imbalanced life in pursuit of his career as a lawyer. They have two children whom he raised after his divorce. The children are Bianca Sharma and Colby Sharma.

Sharma self-published his first book in 1994 at the age of 25 by the title MegaLiving. This was during his years as a litigation lawyer. It is a book on spirituality and stress management.

He also self-published The Monk Who Sold His Ferrari book, which was then picked up for wider distribution by HarperCollins after Ed Carson, HarperCollins’ former president discovered Robin in a bookstore. As of 2019, Robin has had 12 books published and he is the founder of Sharma Leadership International, a training company.

Sharma loves helping children in need to lead happier and healthier lives. For this cause, he founded The Robin Sharma Foundation for Children (RSFC) which is a registered charitable foundation that raises funds from around the world and donates them to children’s causes.

Some of Sharma’s books are:

♦ He was ranked among “The Top 5 of the world’s leadership gurus” along with Jack Welch, Jim Collins and John Maxwell.

♦ Speaking.com voted Robin one of “The Top 5 Leadership Speakers in the world”.

♦ Robin’s runaway bestseller “The Leader Who Had No Title” was the #1 Business book on amazon.com