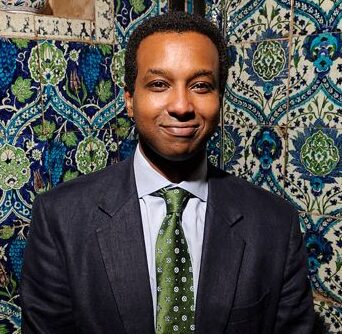 Rageh Omar is a British journalist and writer of Somali origin who works for Al Jazeera English. He formerly worked as a BBC foreign affairs journalist, where he created a reputation for himself reporting from Iraq.

How old is Rageh Omar? – Age

Where did Rageh Omar go to school? – Education

Omar went to the Dragon School in Oxford and Cheltenham College in Gloucestershire for his education. He subsequently went on to study Modern History at New College, Oxford.

Omar was born in 1967 in Mogadishu to Abdullahi and Sahra Omaar. His father was an accountant who went on to become a businessman, a representative of Massey Ferguson tractors, the creator of the country’s first independent newspaper, and the man responsible for introducing Coca-Cola to Somalia. He is a Muslim whose family is originally from Hargeisa. Omar comes from a prominent family in the Habr Awal Isaaq clan’s Sa’ad Musa sub-division. Omaar immigrated to the United Kingdom when he was two years old. His elder brother, Mohamed Abdullahi Omaar, was a former Foreign Minister of Somalia.

What is Rageh Omar Salary?

Omar began his journalistic career as a trainee for The Voice newspaper. In 1991, he moved to Ethiopia where he freelanced as a foreign correspondent, working mainly for the BBC World Service. A year later, Omaar returned to London to work as a producer and broadcast journalist for the BBC. He moved to South Africa after having been appointed the BBC’s Africa correspondent. Omaar’s wife and children were based there through 2004, and his regular commuting made domestic life a challenge. His career highlights include reporting live on the conflicts in Somalia and Iraq.

In September 2006, Omaar joined Al Jazeera English. He served as a Middle Eastern correspondent for its London Division. During his time with the news organization, Omaar presented the nightly weekday documentary series Witness.

In January 2013, it was announced that Omaar would be joining ITV News as a special correspondent. He was promoted the following year to ITV News’ International Affairs Editor. Since October 2015, alongside his duties as International Affairs Editor, Rageh has been a Deputy Newscaster for ITV News at Ten. Since September 2017, Omaar has occasionally presented the ITV Lunchtime News, including the ITV News London Lunchtime Bulletin, and the ITV Evening News.

In 2003, Omaar was the recipient of an Ethnic Multicultural Media Academy award for the best TV journalist.

In 2008, he was also presented the Arab Media Watch Award for excellence in journalism.

In January 2014 and 2015, Omaar was nominated for the Services to Media award at the British Muslim Awards.

Rageh Omaar is a British journalist and writer of Somali origin who works for Al Jazeera English. He formerly worked as a BBC foreign affairs journalist, where he created a reputation for himself reporting from Iraq.