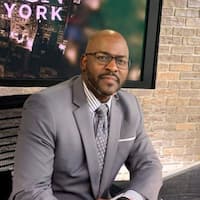 Otis Livingston is an award-winning journalist from the United States working as the CBS2’s weekday sports anchor. He has been working with the WCBS-TV team since 2009.

How old is Otis Livingston? – Age

Where did Otis Livingston go to college?

Livingston earned a Bachelor of Science in Telecommunications from the University of Idaho and was a part of the national championship-winning Kansas University basketball team in 1988.

Livingston had the privilege of carrying the Olympic torch through Harlem in 2004 as part of the torch’s world tour leading up to the Athens Summer Olympics. He was a studio host and field reporter for NBC’s coverage of the Athens Games later that summer and a field reporter for the Torino Olympics in 2006. As a sideline reporter, Otis also covered pre-season games for the New York Giants.