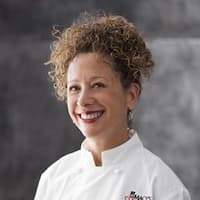 How old is Nancy Silverton? – Age

Silverton was born into a Jewish family; her mother, Doris, worked as a writer for General Hospital, and her father, Larry, was a lawyer. Silverton enrolled at Sonoma State University as a political science major and decided to become a chef after having what she later described as an epiphany in her freshman year.

Nancy was married to chef Mark Peel from 1984 to 2004, with whom he had three children. She has three kids.

Nancy’s Fancy was launched by Silverton in June 2015. Nancy’s Fancy, a luxury line of seven flavors of gelato and sorbetto, is available in supermarkets. The company’s original location was in Chatsworth, California; however, they have since relocated to a 6,000 square foot warehouse in Downtown Los Angeles’ Arts District.

Silverton collaborated with New York chef Mario Batali and frequent collaborator Joseph Bastianich to open Osteria Mozza, an Italian restaurant, in 2007. Pizzeria Mozza, similar to the evolution of La Brea Bakery, opened in an adjoining space prior to the opening of the main restaurant. It elicited an “instant and outsize swoon.” The Los Angeles Times rated it four stars, while the New York Times described it as a “serious and impressive restaurant.”

Osteria Mozza opened four months after the pizzeria, to similar acclaim. Although the restaurant’s entire menu was lauded, Silverton’s interpretation of antipasti as a Mozzarella bar received special attention, with Zagat stating that she had “perfected the art of cheese.” The James Beard Foundation nominated it for Best New Restaurant the year it opened, and it was awarded a Michelin star in 2008. In the 2019 Michelin Guide for California, Osteria Mozza maintained its Michelin star. Osteria Mozza later expanded to Newport Beach, California, and Singapore. Since then, the main Mozza location has expanded to include Mozza2Go and a third restaurant, Chi Spacca, which specializes in meats. Silverton received the James Beard Foundation’s Outstanding Chef Award in 2014, the highest honor bestowed by the Beard Awards.

Silverton, her then-husband, chef Mark Peel, and Manfred Krankl opened Campanile in 1989, and critic Jonathan Gold later wrote, “It is difficult to overstate Campanile’s contributions to American cooking.” Silverton and Peel opened La Brea Bakery in a space adjacent to the main restaurant almost as an afterthought; it opened before Campanile. Silverton worked as the bakery’s head baker and the restaurant’s head pastry chef on La Brea Avenue in Los Angeles’ Hancock Park neighborhood.

Silverton had limited experience baking bread while working as a pastry chef at Spago and began experimenting with recipes after reading an article about Acme, a San Francisco artisan bakery. She used grapes, which contain natural yeast, and soaked them in flour and water for days. She then mixed the dough, formed the loaves by hand, and let them rise twice over the course of two days. She was satisfied after six months and “hundreds” of attempts to perfect the recipe. Artisan bread was relatively unknown in Los Angeles at the time, but within a few weeks, the bakery’s sales had risen to $1,000 per day. On Thanksgiving in 1990, the bread line wrapped around the block and down a side street.

Campanile was also a huge success from the start. Silverton and Peel were well-known for their work at Spago and Michael’s, and Campanile received unanimous praise from the press. Reservations were difficult, and annual sales exceeded $2 million in their first year. Silverton would bake bread all night, sleep briefly, wake up in the middle of the day to prepare pastries and desserts for the restaurant, and then nap again before dinner. She was named Outstanding Pastry Chef by the James Beard Foundation in 1991.

In 2005, she published Nancy Silverton’s Sandwich Book: The Best Sandwiches Ever—from Thursday Nights at Campanile. IAWS, an Irish investment group, purchased La Brea Bakery in 2001 for a price ranging from $56 million to $68.5 million. Silverton made more than $5 million from the sale and invested with Bernard Madoff; her profits were lost when his pyramid scheme collapsed in 2008. She and Peel divorced in 2005, and Silverton left Campanile after their divorce in 2007. In October of 2012, the restaurant closed its doors.

The Los Angeles Times wrote in an article about the awards that she had “not only given Los Angeles great bread, but through her work at Campanile, she has virtually redefined what dessert is.”

However, Silverton was “frazzled.” She and Krankl returned to the group of investors who had funded Campanile in 1992 and built a much larger, fully staffed commercial bakery. At the same time, they separated the bakery into its own entity. In 1993, Silverton became less involved with the bakery, primarily serving as an advisor. Nancy Silverton’s Breads from the La Brea Bakery: Recipes for the Connoisseur, her second book, was published in 1996.