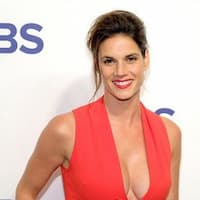 Missy Peregrym is a former fashion model and actress from Canada best known for her roles in the 2006 film Stick It and the ABC/Global Television Network series Rookie Blue, for which she received a Canadian Screen Award nomination 2016.

How old is Missy Peregrym? – Age

She was born to Rev. Darrell Peregrym, a Pentecostal minister, and Vanessa Peregrym, a housewife. She describes herself as a tomboy when she was younger.

In June 2014, Peregrym married American actor Zachary Levi. Peregrym filed for divorce in April 2015, citing December 3, 2014, as the date of separation. On December 30, 2018, Peregrym married Australian actor Tom Oakley in Los Angeles. She and Oakley have a son named Otis Paradis Oakley, who was born on March 21, 2020.

She was cast as Maggie Bell, FBI special agent and the widow of a Wall Street Journal investigative reporter in the American crime drama television series FBI.

The series focuses on the inner workings of the Federal Bureau of Investigation’s New York office (FBI) In major cases, this elite unit brings all of its talents, intellect, and technical expertise to bear. Maggie Bell is deeply committed to both the people she works with and those she protects. These top-tier agents work tirelessly to investigate cases involving terrorism, organized crime, and counterintelligence. The team also includes Assistant Special Agent in Charge Jubal Valentine, who serves as the office’s nerve center.

She was cast as Andrea “Andy” Grace McNally, the series protagonist in the Canadian police drama television series Rookie Blue.

McNally is motivated by a desire to do the right thing, even if it means deviating from protocol. Tommy McNally, her father, used to be a homicide detective before retiring. She begins a relationship with homicide detective Luke Callaghan at the start of the series. Andy is the most upbeat person on the job because she has seen firsthand where the job can lead, and she does not want to go there. She and her training officer, Sam Swarek, have a strong attraction, but she rejects him before things get too serious. She develops feelings for Nick Collins, her undercover partner, and the two begin a new relationship. When Sam is shot in the season 4 finale, she rides in the ambulance with him and then confesses her love for him.

Missy Peregrym Life as We Know It

She played the role of Jackie Bradford, Dino’s on and off girlfriend and best friends with Sue and Deborah in the American teen drama television series Life as We Know It.

Dino Whitman starred in Life as We Know It, which was set at Woodrow Wilson High School in Seattle, Washington. His relationship with his girlfriend, Jackie Bradford, was strained. Dino’s best friends were Ben Connor and Jonathan Fields. Dino’s parents divorced after his mother had an affair with his hockey coach.

She played the role of Andi Prendergast, Sam’s girlfriend and for a time, manager in the American comedy television series Reaper.

Andi is Sam Oliver’s third assistant. She is one of five people who have taken Sam’s soul. When Ted was fired for harassing a “secret shopper” in season 2, Andi was promoted to Work Bench manager. She declares her love for Sam in the season two finale and offers her soul as a prize in a contest between Sam and the Devil. After Sam loses the contest, she is forced to share his fate. She has a crush on Sam and once dated him in season one.