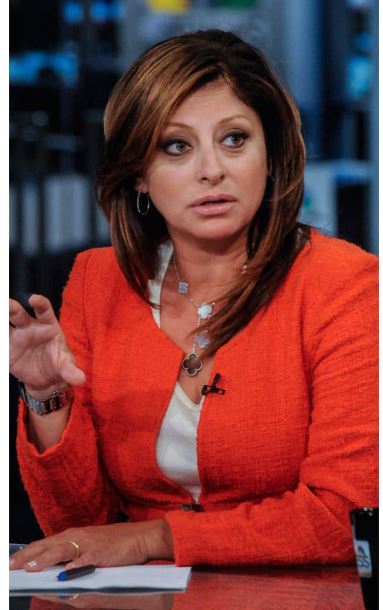 How old is Maria Bartiromo?- Age

The Fox Business host is 54 years old as of September 11, 2021. She was born in 1967 in Brooklyn, New York, United States. Her real birth name is Maria Sara Bartiromo.

What ethnicity is Maria Bartiromo?- Family and Parents

She is from an Italian-American family born to Vincent Bartiromo and Josephine Bartiromo. Her father owned a restaurant in Brooklyn named Rex Manor while her mother was a hostess seating guests who also worked as a clerk at an off-track betting parlor. Her maternal family moved from Agrigento, Sicily, to the U.S. in 1898. Her grandfather, Carmine Bartiromo, arrived in New York from Nocera in Naples in 1933 and served in the U.S. Army.

Her husband, Jonathan Steinberg, who she married in 1999 is the chief executive officer of WisdomTree Investments. She is the daughter-in-law of billionaire financier Saul Steinberg. The couple has no child and lives in the hamlet of Westhampton, New York.

Bartiromo attended the Fontbonne Hall Academy at Bay Ridge. At the same time, she worked as a coat check individual at her dad’s restaurant and as a stock clerk at Kleinfeld’s wedding dress store. Bartiromo began college in C. W. Post, before going to New York University. She later graduated from NYU with a Bachelor of Arts degree in Journalism and Economics. She was interned at CNN while working at NYU.

What is Maria Bartiromo salary?

She previously earned an annual salary of $6 million at CNBC. Her current salary is estimated to be $10 million per year.

What is Maria Bartiromo’s Net Worth?

She has an estimated net worth of $50 million.

Where does Maria Bartiromo live? – House

Her husband purchased their $6.5 five-bedroom townhouse on Manhattan’s Upper East Side. The five-bedroom home, east of Third Avenue, has a second-floor balcony overlooking the 39-foot backyard courtyard, plus a two-bedroom surveillance system with a flat-screen television. They also have a beach house in the hamlet of Westhampton, New York.

During her time with FBN, Bartiromo interviewed some of the most influential business and economic policy figures. The network has organized leading business conferences, including the World Economic Forum in Davos, Switzerland, and the annual JPMorgan Healthcare Summit. She recently debuted an hour-long undercover documentary exploring the future of the Artificial Intelligence (AI) market and its future effects on business. She also met former New York professional Yankee shortstop Alex Rodriguez, Harry Reid, and Valerie Jarrett.

In November 2015, Bartiromo, along with FBN’s Neil Cavuto, moderated the first Republican presidential primary debate on the network. According to Nielsen reports, the debate generated 13.5 million overall viewers and 3.7 million in the main 25-54 demo, making it the most highly rated show in network history. In January 2016, both Bartiromo and Cavuto took on their position as moderators of debate, bringing a total of 11 million viewers with 3 million in the main 25-54 demo, making it the second-highest rating show in network history according to Nielsen Media Research.

Bartiromo has been involved in the industry and the economy for more than 25 years and was one of the building blocks of the CNBC cable business network. During her 20-year stint as the face of CNBC, she launched the network’s morning show, Squawk Box; hosted The Closing Bell with Maria Bartiromo; and was the producer and managing editor of the nationally syndicated On Money with Maria Bartiromo, formerly The Wall Street Journal Report with Maria Bartiromo.

Bartiromo was a pioneer in the world of financial news television. In 1995, she became the first journalist to broadcast regularly live on the floor of the New York Stock Exchange. After five years as a reporter, writer and assignment editor for CNN Business News, she joined CNBC in 1993, where she reported and produced some of CNN’s best business programs. She has won many coveted honors, including two Emmys and a Gracie Award. Her first Emmy was for her 2008 Television and Documentary coverage of the financial crisis of 2007-2008, and her “Bailout Talks Collapse” coverage was shown on NBC Nightly News. Later, she received a second Emmy for her 2009 documentary, “Inside the Mind of Google,” broadcast internationally on CNBC. Bartiromo received the Gracie Award for “Greenspan: Power, Money & American Dream,” also broadcasted internationally on CNBC.

In 2009, the Financial Times called her one of the “50 Faces That Shaped the Decade” and she was the first female journalist to join the 2011 Cable Hall of Fame class. In 2016, she was welcomed to the Library of American Broadcasting as one of the Giants of Broadcasting & Electronic Arts. Bartiromo is the author of many novels, including The Weekend That Changed Wall Street, published by Portfolio/Penguin, and The Ten Rules of Lasting Prosperity, published by Random House, both published in 2010.