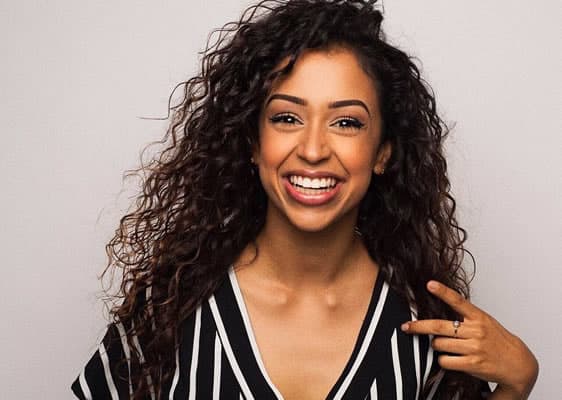 Liza Koshy is a YouTuber, comedian, actress, actress and television host from the United States of America. Her career and entry into the limelight began when she joined the social networking video hosting platform, Vine, in 2013. After getting the hang of it, she started her YouTube channel. With a growing career, Koshy also joined acting, since when she has had roles in such productions as Escape the Night, Boo! A Madea Halloween, Freakish and was a contributor to the series “Total Request Live” on MTV.

She is a producer and star in the YouTube comedy series “Liza on Demand,” since 2018. Also from 2018 to 2019, she was the host of Double Dare, a Nickelodeon game show. On YouTube, Koshy has over 17 million subscribers on her main channel while her two channels have amassed over 2.5 billion combined views.

How old is Liza Koshy? – Age

Born in Houston, Koshy has a mother of German descent and father of Indian descent. They are Jean Carol, a yoga instructor, and Jose Koshy, a petroleum executive. She is the third child of her parents with two older sisters. She studied at Lamar High School before joining the University of Houston to study business marketing. However, she left school in 2015 to begin her career in Los Angeles.

Liza was in a relationship with fellow YouTube star David Dobrik from late 2015 to late 2017. The former couple revealed that they had broken up in June 2018.

After leaving college and moving to Los Angeles, Miss Koshy joined Vine and began posting comic videos, in 2013. She used the name “Lizzza” and by 2017 when Vine closed, she had 7 million followers. By then, she had already joined YouTube and by 2016, she had began earning her place on the platform. To encourage voter registration in 2016, just before the election, Koshy had a sit down interview with former President Barack Obama. In early 2018, Liza temporarily ceased posting videos on her main YouTube channel as she was a full-time actress and show host. In 2019, she resumed the posting of new videos.