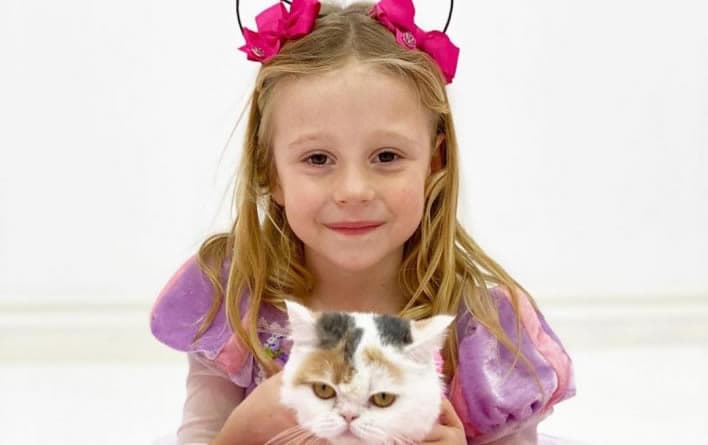 Born in Krasnodar, which is in Southern Russia, Natsya and her parents lived in the country until 2018 when they relocated to the United States and settled in Florida. Natsya’s father is known as Sergey Radzinskaya while her mother Anna Radzinskaya.

At birth, Natsya was diagnosed with cerebral palsy resulting from intrauterine trauma, a condition that was feared to likely negatively affect her ability to speak or walk. At the age of 2, in 2016, her parents decided to film their daughter going about her life as a kid and they shared the videos on YouTube. This they did to prevent a relapse of cerebral palsy as a form of therapy and to monitor their child’s development. The activities she was involved in included playing with her toys as well as her father, with the intention of sharing their daughter’s progress with relatives and friends.

In a twist, the videos got many views after sometime and Natsya’s parents came to the conclusion that they would focus more on developing their daughter’s YouTube presence. A year after beginning their YouTube presence, Natsya’s parents signed a management deal with entertainment and YouTube management company, Yoola. Yoola partners with creators to help them develop, license, distribute, promote and make money from their content and audience. She is also represented by WME, part of the Endeavor group along with IMG.

Since then, the young Anastasia has launched several other channels through which she shares her content in seven languages. The content revolves around Nastya and her dad playing, learning, dressing up, going to amusement parks, re-enacting children’s tales and nursery rhymes. Her other “cast members” include her cat, friends and dad. She can speak English, Russian, Mandarin and Spanish.

According to Forbes, Stacy “has become one of the world’s fastest-growing creators, thanks to videos in seven languages while in 2019, it listed Anastasia as the third highest-paid YouTuber in the world, with an estimated annual income of $18 million. As a children’s vlogger, she is the most popular one, taking into account her videos total views and subscribers.

As of October 2020 and over a period of six months, the toy company Jazwares will be unveiling a new line of toys that are inspired and based on the YouTube sensation, Like Nastya. The toys include the likes of a “Like Nastya” doll that will be available from January 2021, games, dress-ups, role-plays and much more. Jazwares toyline is aiming at bringing to life The six-year old’s YouTube channel activity.

This deal has been backed up by several partnerships that were brokered by IMG Licensing and is set to launch just before the holiday season. By early November 2020, this lifestyle collection will be available on Amazon for sale globally. Apparel like bags, sleepwear, headwear, girls underwear and accessories are additionally set to be in spring 2021 and become available online and in stores. Aside from the line of toys, Like Nastya has her own mobile game app.