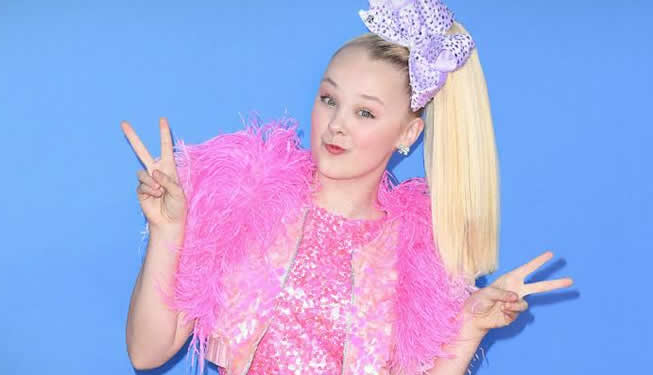 JoJo Siwa is an American singer, actress, dancer and YouTuber who is well known for her appearance on the reality TV series Dance Moms for two seasons with her mom, Jessalynn Siwa and also her 2016 single Boomerang and Kid in a Candy Store (2017) song. She has two YouTube channels, “It’s JoJo Siwa” and “JoJo Siwa TV,” through which she posts videos of her day-to-day life, daily. Like most celebrities, Siwa’s names have a name, they are known as Siwanatorz.

Jojo has one sibling, an older brother known as Jayden Siwa. He is a vlogger like Jojo. They are children of Jessalynn Siwa (born as Jessalynn Lombardi), a professional dance instructor from Iowa and her husband Dr. Tom Siwa, a chiropractor from Nebraska.

Jojo began appearing on TV at a very young age on the series Abby’s Ultimate Dance Competition. She managed to be among the top-5 finalist on season two of the series, making her the youngest contestant on season 2. Jojo was on the series with her mother and she was let off in week 9. In 2014, she auditioned for another dance competition, Abby Lee Miller’s ALDC dance competition team. She made it to the team as she was selected to join them in early 2015. She also started appearing on Dance Moms, Lifetime reality TV show that follows the ALDC team.

Jojo’s career in music kicked off with her debut single “Boomerang.” She released the song in May 2016 alongside a previous single, for digital download. Boomerang became a hit and it addresses online bullying. Due to the song’s popularity, Jojo was named the Breakout Artist of the Year by Vivid Seats in 2018.

She is signed to Nickelodeon since 2017 and has acted in several shows and films by the network. They include “Lip Sync Battle Shorties” with Nick Cannon, “Blurt” with Jace Norman, and more.

Known for her signature look, wearing large and colorful bows in her hair, Jojo launched her line of bows known as JoJo’s Bows in 2016. The bows were to be sold at a fashion accessories company known as Claire’s that is aimed at girls, aged 6 to 12. JoJo’s bows got the attention of young girls especially in the U.K. but they were banned in schools for a couple of reasons.

Jojo partnered with J. C. Penney, an American department store, to release bedroom decor, a line of accessories as well as a doll that looks like her. She had her first major concert, D.R.E.A.M. The Tour in mid-2019. Basically, it was a trip all around the United States, the UK, Canada and Ireland as she performed some of her songs.

The youngest Siwa family member has released several young-children oriented books. They are:

Jojo Siwa Net Worth | How much money does JoJo Siwa make?

Jojo has an estimated net worth of $10 Million. Her earnings are from the many projects she is involved in, from her songs, and appearing in shows as an actress or dancer.