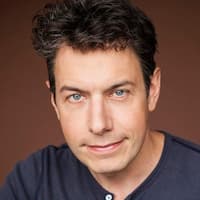 John Ross Bowie is an actor and comedian from the United States best known for his roles on The Big Bang Theory and on Speechless from 2016 to 2019, in What The Bleep Do We Know?, Reno 911!, Curb Your Enthusiasm, Glee, and Good Luck Charlie.

His parents, Bruce and Eileen Bryan Bowie are both deceased. In 1989, he graduated from the Bayard Rustin High School for the Humanities, and he has a B.A. in English from Ithaca College.

He is married to comedian Jamie Denbo. The couple has a daughter and a son.

He has an estimated net worth of  $3 million.

He was cast as Jimmy DiMeo, the fun-loving, easily persuadable father of the family who is a supervisor of baggage handlers at the airport in the American television sitcom Speechless.

Maya, a British mother with a no-holds-barred attitude; her husband Jimmy, who doesn’t seem to care what others think; Dylan, their no-nonsense athletic daughter; Ray, their scholarly middle child who acts as the family’s “voice of reason”; and JJ, their oldest son with cerebral palsy, are all featured in the series. JJ communicates using headgear with a laser pointer to indicate various words, letters, and numbers on a board attached to his wheelchair because he is unable to speak.

He was cast as Jared in the American sitcom Retired at 35.

The series follows David, a successful New Yorker who decides to leave the rat race and his job in the big city to visit his father and mother in a Florida retirement community. In order to reconnect with them and re-evaluate his life, he decides to quit his job and take some time to live the retirement dream that so many people strive for. But, to his surprise, he soon discovers that his parents are in the final stages of divorce.

He appeared as Dr. Max Von Sydow, a doctor who tries to cure The Chief’s condition in the American dark comedy television series Childrens Hospital.

He was cast as Wally Berman in the American sitcom television series A.U.S.A. Adam Sullivan is a naive but well-intentioned federal prosecutor in New York City who must deal with the challenges of both his professional and romantic lives. While working for the Department of Justice, Sullivan encounters both colleagues and adversaries who question his every move.