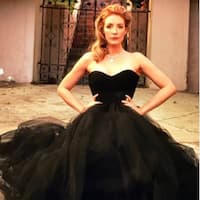 Jennifer Finnigan is a Canadian actress who is best known for her roles on the American soap opera The Bold and the Beautiful from 2000 to 2004, for which she received three Daytime Emmy Awards for Outstanding Younger Actress in a Drama Series. She also appeared on CBS’s legal drama Close to Home and ABC’s sitcom Better with You. Finnigan also appeared in the FX show Tyrant. She went on to star in the CBS sci-fi drama Salvation.

How old is Jennifer Finnigan? – Age

She was born to Diane Rioux Finnigan and Jack Finnigan, a popular radio personality who was a fixture on CJAD radio in Montreal from 1972 to 2005. She graduated in 1996 from The Sacred Heart School of Montreal, a Roman Catholic all-girls private school.

Finnigan married actor Jonathan Silverman on the Greek island of Mykonos on June 7, 2007. Ella Jack, her daughter with Silverman, was born on September 29, 2017.

She has an estimated net worth of $9 Million.

She was cast as Lisa Waters, in the 2008 American family film Beethoven’s Big Break.

Eddie, a widowed father, and struggling animal trainer, works as an assistant to Sal DeMarco, an untalented, egocentric animal show host. Both men were hired to train the animals for the film Frizzy, The Bichon Frise. When Frizzy is kidnapped, Sal blames Eddie for the dog’s mishandling. Billy, Eddie’s son, is out walking around town when he notices a large, stray dog following him. After attempting to call the dog Wolfgang, Billy brings him home and names him Beethoven when the dog expresses an interest in Beethoven’s Fifth Symphony.

Jennifer Finnigan The Opposite Sex

She appeared as Stephanie in the 2014 small-budget indie film The Opposite Sex.

Vince is a successful, driven divorce lawyer who is a notorious womanizer who has affairs with his clients. However, he is piqued when he meets the competitive Jane, a young divorcee who despises men. The two agree to a series of bets in which the loser’s fate is decided by the winner. Neither of them anticipates falling in love.

She was cast as Molly Al-Fayeed: Barry’s wife in the American political drama television series Tyrant.

Bassam “Barry” Al-Fayeed, the younger of two sons of a notorious Middle Eastern tyrant, has been running from his past for the past 20 years. He is now a pediatrician in the United States, with an American wife, son, and daughter, and no desire to return to his ancestral roots. When he is forced to return to his home country for his nephew’s wedding, he is quickly dragged into a tense political crisis when his father dies in the midst of a growing popular revolution against the ruling family. Bassam must now try to use his clout to steer the new President, his brutal and unstable older brother Jamal, to a political solution that will prevent a bloodbath.