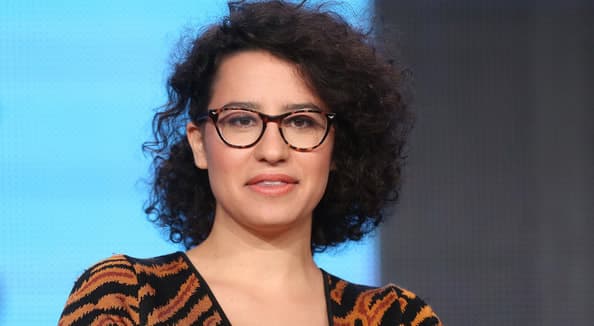 Ilana Glazer is a comedian, mainly doing stand-up, actress as well as writer from the United States of America. Her full name is Ilana Rose Glazer and she is best known for co-creating the Comedy Central series Broad City, which she also co-starred in. Other acting credits to her include Rough Night (2017).

Ilana was born and grew up in a family of two. She has a brother by the name Eliot. The two siblings are the children of Larry Glazer and Sandi Wexler, both working in insurance and finance. The Glazer household lived in St. James, New York, and they practised Reform Judaism.

Ilana is a married woman. Her husband is computational biologist, David Rooklin. Prior to their wedding in February 2017, the couple had dated for close to five years, first meeting in 2012 in Washington Square Park.

Ilana and David Rooklin’s wedding ceremony was a private affair in Brooklyn after which they took a trip to Iceland for their honeymoon.

Ms. Glazer began performing stand-up comedy early on in her time in theatre school. She had joined the Upright Citizens Brigade Theatre in 2006 before joining the stand-up comics world as well as doing improv. In 2009, she teamed with Abbi Jacobson and they co-created the web series, Broad City. In the series, they are also the main actresses as fictionalized versions of themselves. It garnered so much positive criticism and was nominated for an ECNY Award for ‘Best Web Series’. American actress and comedian, Amy Poehler, was intrigued by the web series and met up with Glazer and Ms. Jacobson and agreed to appear in the series’ finale as well as help the duo to shop a pilot script based on the series.

Successfully, the three ladies came up with the pilot script and with Poehler as the producer, FX cable network bought the script but made a decision not to proceed with development. Jacobson and Glazer then approached Comedy Central who bought the script from FX and ordered a pilot.

In January 2014, Broad City premiered on television. It received lots of positive reviews and in February 2014, the show was renewed for a second season. On 17th February 2016, the third season premiered while its fourth and fifth final seasons were announced in early 2016.

Ilana Glazer The Planet is Burning

The Planet is Burning is Glazer’s debut stand up special on Amazon Prime. Grazer serves as an Executive Producer on the special while Ryan Cunningham was the director. It premiered in January 2020.

The Planet is Burning trailer

The comedian has an estimated net worth of $3 million.