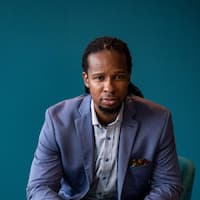 Ibram X. Kendi is an author, professor, anti-racist activist, and historian of race and discriminatory policy in the United States. He will take over as director of Boston University’s Center for Antiracist Research in July 2020. Kendi was named one of Time Magazine’s “100 Most Influential People in the World in 2020.”

Kendi Rogers is the daughter of Carol Rogers, a former healthcare business analyst for a healthcare organization, and Larry Rogers, a tax accountant who later became a hospital chaplain. His parents have both retired and are Methodist ministers. Akil is his older brother. Kendi changed his middle name to Xolani, a Xhosa and Zulu word for “peace”.

Kendi married Sadiqa Kendi, a pediatric emergency medicine physician, in a ceremony officiated by Kendi’s parents in Jamaica in 2013. The wedding ceremony concluded with a naming ceremony for their new surname, “Kendi,” which means “loved one” in the Meru language of Kenya.

Kendi was diagnosed with cancer after a colonoscopy in January 2018. A subsequent examination revealed that he had stage 4 colon cancer that had spread to his liver. Kendi was cancer-free after six months of chemotherapy and surgery that summer. Kendi has been a vegan at least since 2015.

He is the founding director of American University’s Antiracist Research and Policy Center. He is a history and international relations professor, as well as an Ideas Columnist for The Atlantic. Stamped from the Beginning: The Definitive History of Racist Ideas in America, his second book, won the 2016 National Book Award for Nonfiction and became a New York Times Best Seller. Kendi was the NBA’s youngest ever winner of Nonfiction at 34 years old. He is also the author of the award-winning book The Black Campus Movement. His next book, How To Be An Antiracist, will be released in August 2019 by One World, a Random House imprint. He has had essays published in The New York Times and The Washington Post. He was also a Hurston/Wright Legacy Award and NAACP Image Award nominee.

Kendi is a history and international relations professor at American University in Washington, D.C. He established the Antiracist Research and Policy Center. Kendi was announced as a history professor at Boston University in June 2020. Kendi will be the Frances B. Cashin Fellow at Harvard University’s Radcliffe Institute for Advanced Study during the 2020–2021 academic year. In addition, he will be the founding director of the Boston University Center for Antiracist Research. Kendi is a member of the New School for Social and Economic Research’s Board of Trustees. He has visited Brown University and the University of Florida as a visiting scholar.

Kendi’s essays have appeared in books as well as academic journals such as The Journal of African American History, Journal of Social History, Journal of Black Studies, Journal of African American Studies, and The Sixties: A Journal of History, Politics, and Culture. Kendi is also a contributor to The Atlantic. Kendi received the National Book Award for Nonfiction in 2016 for her book Stamped from the Beginning, which was published by Nation Books. He was the prize’s youngest winner ever. The book is named after a speech given by Jefferson Davis to the United States Senate in 1860, and it is based on the lives of historical figures Cotton Mather, Thomas Jefferson, William Lloyd Garrison, and W.E.B. Du Bois, as well as current figure Angela Davis.

Ibram X. Kendi How to Be an Antiracist

Kendi’s most popular work to date, How to Be an Antiracist, was a New York Times #1 Best Seller in 2020. Professor Jeffrey C. Stewart described it as the “most courageous book on the problem of race in the Western mind to date.” Afua Hirsch praised the book’s introspection, writing that it was relevant in light of current political events. In an article for City Journal, Andrew Sullivan and Coleman Hughes criticized Kendi’s proposal to delegate most government oversight to a Department of Antiracism. Hughes called the book “s Kloppily researched, insufficiently fact-checked, and occasionally self-contradictory.”

♦ 2012 – The Black Campus Movement: Black Students and the Racial Reconstitution of Higher Education
♦ 2016 – Stamped from the Beginning: The Definitive History of Racist Ideas in America. New York: Nation Books.
♦ 2019 – How to Be An Antiracist. New York: One World.
♦ 2020 – STAMPED: Racism, Antiracism, and You, with Jason Reynolds. New York: Little, Brown, and Company.
♦ 2020 – Antiracist Baby, illustrated by Ashley Lukashevsky. New York: Kokila.
♦ 2021 – Four Hundred Souls: A Community History of African America