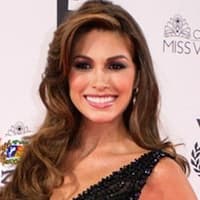 How old is Gabriela Isler? – Age

She is of Swiss and German ancestry, as well as Swiss citizenship, according to her Lausanne-born grandparents. The surname “Isler” is a common one in Switzerland. She began modeling at the age of 14 to console her mother and grandmother when her aunt died. Isler was born in Valencia, but she has lived and educated in Maracay since she was a child. She has a bachelor’s degree in management and marketing.

She participated as Miss Guárico, one of 24 contestants in Miss Venezuela 2012, a national beauty pageant held in Caracas on August 30, 2012, where she won the Miss Elegance award and became the ninth Miss Venezuela winner from Guárico, earning the chance to represent her country in Miss Universe.

Isler founded and leads the Universe of Blessings Fund, a 501(c)(3) nonprofit dedicated to empowering young women and girls and reducing the incidence of adolescent pregnancy and maternal death, both of which are particularly problematic in her home country of Venezuela. Isler is an ambassador for the Scalabrini International Migration Network, a group dedicated to helping victims of human trafficking and their families. She’s also developing a program that uses a values-based curriculum to help young adults in Venezuela reach their full potential, both personally and professionally, by teaching them key life and vocational skills.

Isler was crowned Miss Universe 2013 on November 9 in Moscow, Russia, by outgoing titleholder Olivia Culpo of the United States. She is the sixth Venezuelan to win the pageant in the last four years (since 2009). Isler keeps Venezuela’s place as the world’s second most successful country at Miss Universe. Isler was designated the new Madrina of the Latino Commission on AIDS to mark her arrival as an international voice. She and David Chocarro presented at the Billboard Latin Music Awards in Miami.

At Miami Fashion Week, Isler walked the runway for Yamamay for Miss Universe swimwear and Sherri Hill for Sherri Hill. On May 21, 2014, she attended El Museo’s Gala 2014 at Cipriani 42nd Street in New York City. On June 26, 2014, Isler attended a special showing of Tammy New York at Landmark Sunshine Cinema in New York City. Isler traveled to Austria in July 2014 to assist with the crowning of the Miss Austria winners on July 3, 2014.

Isler was a guest of Kelly Ripa and Donna Karan at the OCRF’s 17th Annual Super Saturday. Russell and Danny Simmons held the 15th annual Art for Life Gala at Fairview Farms in Water Mill, New York. On January 25, 2015, Isler was crowned Miss Universe 2014 at the 63rd Miss Universe Pageant in Miami, Florida. She has visited Austria, Azerbaijan, the Bahamas, Canada, Colombia, Curaçao, the Czech Republic, the Dominican Republic, Ecuador, Indonesia, Mexico, Morocco, the Philippines, Slovakia, the Vatican City, Russia, and Venezuela during her reign.