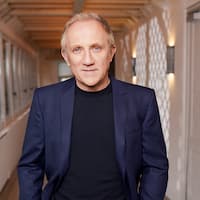 François-Henri Pinault is a French businessman who has served as the chairman and CEO of Kering since 2005 and as the president of Groupe Artémis since 2003. The retail conglomerate PPR was transformed into the luxury fashion group Kering under his leadership.

How old is François-Henri Pinault? – Age

Pinault is the son of Louise Gautier and François Pinault, the founder of Pinault SA, which was named Pinault-Printemps-Redoute, then PPR, and then Kering.

From 1996 to 2004, Pinault was married to Dorothée Lepère. They had two children together, a son named François in 1998 and a daughter named Mathilde in 2001. From September 2005 to January 2006, he was in a relationship with supermodel Linda Evangelista. Augustin James Evangelista, their son, was born in October 2006. He began dating actress Salma Hayek in April 2006. Valentina, their daughter, was born on September 21, 2007. The couple married on February 14, 2009, in Paris. They renewed their wedding vows in Venice in April 2009.

What is Francois Pinault Net Worth?

Pinault established the $100 million Red River West investment fund in 2017 to support Artémis’ investments in the technology sector. He has an estimated net worth of US$43.1 Billion.

Hayek and Pinault left because their 8,000-square-foot home was becoming too small for them. They submitted plans in 2019 to demolish the entire house and replace it with a 17,500-square-foot modern monster mansion. While it has not been publicly announced whether those plans were approved, it appears the couple is proceeding with their scheduled demolition of the existing structure.

Pinault has been the President of Groupe Artémis, Kering’s parent company, since 2003, and is the owner of the winery Château Latour, the auction house Christie’s, and the soccer team Stade Rennais F.C. (Ligue 1). In 2015, Artémis also made an investment in the cruise ship operator Compagnie du Ponant.

Artémis also has control over the Pinault Collection. In 2016, Pinault announced plans to renovate Paris’ Bourse de Commerce building into a Pinault Collection-branded contemporary art museum. Pinault established the $100 million Red River West investment fund in 2017 to support Artémis’ investments in the technology sector. In 2019, he led the Stade Rennais to its first Coupe de France victory. In 2019, he celebrated the Stade Rennais F.C.’s first Coupe de France victory since it was purchased by the Pinault family in 1998.

Pinault took over as President and CEO of PPR in March 2005, initiating the company’s transformation into an international luxury fashion conglomerate. In June 2013, he changed the name of PPR to Kering. The new name is a nod to his Breton roots, with “Ker” meaning “home” in the region’s dialect and sounding similar to “caring.” Kering was named the top sustainable textile, apparel, and luxury goods corporation in the Corporate Knights Global 100 index in January 2018.

During the G7 summit in August 2019, he was tasked by French President Emmanuel Macron with establishing the Fashion Pact, an initiative signed by 56 fashion companies pledging to implement concrete measures to reduce their environmental impact. He confirmed Kering’s exit from the Sport & Lifestyle sector in 2018 in order to focus solely on the Luxury sector.

From 2005 to 2017, the group’s luxury revenues increased from 3 to 10 billion euros, up from 15.5 billion euros the previous year, when he announced his plan to outperform Louis Vuitton with Gucci over time. In 2009, he financed Yann Arthus-documentary Bertrand’s Home, which shows aerial shots of various locations on Earth and discusses how humanity is endangering the planet’s ecological balance.