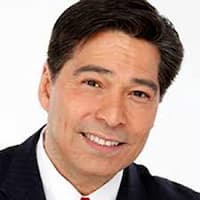 How old is David Novarro? – Age

Novarro is a married man and the couple has a son named Daniel Novarro. His wife had sent an old photo of them together at ABC7 New York for Valentine’s Day in 2014.

She has an estimated net worth of $2million.

In December 2010, he rejoined the Eyewitness News Team. Novarro began his work as a college intern at Eyewitness News before rising through the ranks to become a reporter. Later, he was promoted to New Jersey Bureau Correspondent and then to Eyewitness News Sunday Morning anchor.

Novarro has covered notable stories for Eyewitness News, including the racial profiling case that led to the overhaul of the New Jersey State Police Department, terror cells operating in New York City and New Jersey, and the first World Trade Center attack, which included a rare interview with blind Sheikh Omar Abdul-Rahman, the convicted bombing mastermind.

His revelations on people held captive in their Brooklyn apartment building by drug dealers who had transformed it into a crack house earned him an Emmy. Novarro was instrumental in the growth of the Eyewitness News community affairs show “Tiempo,” which was the first public affairs program in New York City dedicated to matters of concern to the Hispanic community. He is proud of his Latino heritage and works tirelessly to improve his town.

David relocated to Chicago in 2000 to anchor WFLD-morning TV’s broadcast, and he was promoted to lead the station’s new 10 p.m. program in 2007. He covered Barack Obama’s presidential campaign in Chicago, including profiles of the then-Senator and his family at their home. During Obama’s historic election night victory, he hosted live coverage from Grant Park. In a Chicago radio survey in 2010, Novarro was voted “Best Newscaster.” Shortly after, he returned to New York, where he began his career as a journalist.