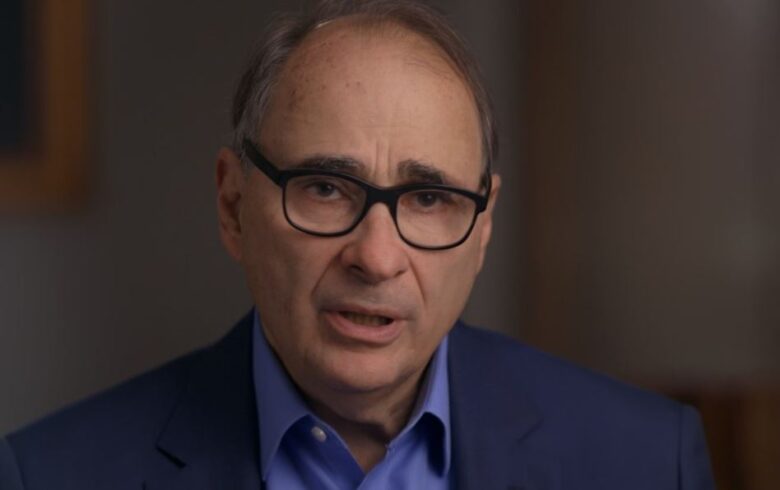 David Axelrod is a political consultant who is best known for his work as the Chief strategist in the United States during Barack Obama’s presidential campaigns. He also got to serve in the government during the Obama administration’s first term as Senior Advisor to the President. Axelrod is also an author and political analyst who used to write for the Chicago Tribune and for CNN from 2015 as a Senior Political Commentator.

In December 2019, he joined and began serving as the director of the University of Chicago Institute of Politics, a non-partisan entity.

How old is David Axelrod? – Age

The former Senior Advisor to the President is 65 years old as of February 22, 2020. He was born in 1955 in Lower East Side, New York, United States as David M. Axelrod.

Axelrod was born in a Jewish family in New York City and raised in Stuyvesant Town. He is the son of Myril Bennett, a former journalist and advertising executive who worked at Young & Rubicam, and Joseph Axelrod, a former psychologist and baseball fan. He has one known sibling, a sister by the name Joan Axelrod Lehrich. As a family, they lived together until when David was eight years old when the parents separated from each other. He lost his father in 1977 to suicide.

Axelrod is married to Susan Landau, the daughter of research doctor Richard L. Landau. The two met while they were both in college, with Susan as a business student. They got married in 1979 and had their first child, a daughter, in June 1981. She is known as Lauren Axelrod and was diagnosed with epilepsy at the age of seven months. The couple has two more children, sons Ethan Axelrod and Michael Axelrod.

Axelrod was a longtime strategist for former Chicago Mayor Richard M. Daley. He worked for the unsuccessful 2004 presidential campaign of John Edwards as well. In order to support Dalton McGuinty and his party in 2002 to be elected to government in the October 2003 election, Axelrod was retained by the Liberal Party of Ontario. In 2006, Axelrod worked for many campaigns, including Eliot Spitzer’s successful campaigns in the gubernatorial election in New York and Deval Patrick’s election as governor in Massachusetts.

‘After two top officials in the administration of longtime client Daley was indicted for what federal prosecutors characterized as ‘pervasive bribery’ in City Hall recruiting and promotions, he wrote an op-ed for the Chicago Tribune in defense of patronage. At Northwestern University, he was an Assistant Professor of Communication Studies. He received an honorary degree in Humane Letters from DePaul University in 2009.

During the 2008 presidential campaign, Axelrod contemplated taking a break from politics. Before he delivered a 2002 anti-war address, Obama consulted Axelrod. Axelrod helped craft the main slogan of ‘change’ for the Obama campaign. The message of change played a part in Obama’s success in the Iowa caucuses. He was critical of the positioning of the Clinton campaign, saying that being the consummate Washington insider is not where you want to be in a year when people want change’ Axelrod also believed that in the Democratic primary, the Hillary Clinton campaign underestimated the importance of the caucus states.

The introduction of a policy that promotes people’s engagement is attributed to Axelrod. The elaborate use of the Internet by Axelrod helped Obama mobilize under-30 voters in 2007 and build up more than 475,000 donors. Obama’s online site allows supporters to blog, create a personal page of their own, and even create a home phone bank. Axelrod was described by the New York Times as a ‘campaign guru’ with an ‘appreciation for Chicago-style politics’ On November 20, 2008, Axelrod was named a senior advisor to the Obama administration.

On January 28, 2011, he resigned from his White House senior advisor post. He was a top aide to Obama’s 2012 campaign for re-election. Axelrod set up a bipartisan Institute of Politics at the University of Chicago in January 2013, where he serves as the director. In February 2013, he joined NBC News and MSNBC as a senior political analyst. He switched to CNN in September 2015. Axelrod was appointed senior strategic advisor to the Labour Party of Britain in 2014.

As specifics of the 2010 United States foreclosure crisis were released in 2010, especially Robo-signing, in his statements to the press, Axelrod was widely criticized for downplaying the severity of the crisis. He claimed that he is not sure that a national moratorium’ is needed because there are in fact valid foreclosures that probably should go forward’

As an author, Axelrod has written a memoir and had it published. It is titled “Believer: My Forty Years in Politics,” published in February 2015.