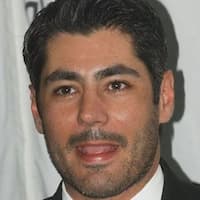 Danny Nucci is an actor from the United States. He is best known for his roles in blockbuster films such as Crimson Tide, The Rock, Eraser, and Titanic as well as the Freeform series The Fosters.

Nucci was born in Klagenfurt, Austria, to a French Moroccan mother and an Italian father, and grew up in Italy until the age of seven, when his family moved to the United States. After briefly residing in Queens, New York, the family relocated to the San Fernando Valley of California, where Nucci attended Grant High School.

Who is Danny Nucci married to? – Wife

In 1995, he married Terre Bridgham, with whom he had a daughter before divorcing in 1998. In the 1997 film That Old Feeling, he played lovers with Paula Marshall; they married in 2003 and have a daughter.

He appeared as Benny Rodriguez, the sandlot team’s coach and a member of the original sandlot team in the 2007 American science fiction sports comedy film The Sandlot: Heading Home. Tommy Santorelli of the Los Angeles Dodgers is knocked out by a wild pitch in 2004 after being blinded by an incorrectly launched fireworks display. When he wakes up in the present, he discovers that, instead of becoming an arrogant player, he has spent his entire career loyal to the Dodgers. He also communicates with his mother’s spirit, proud of who he has become.

In the Freeform series The Fosters, he plays Mike Foster. Mike Foster is the husband of Ana Gutierrez and the father of Brandon Foster and an unborn child. He is also the stepfather of Isabella Gutierrez, Mariana Adams Foster, and Jesus Adams Foster. He is also AJ Hensdale’s former foster father, Stef Foster’s ex-husband, and patrol partner.

Mike and Stef had a rocky marriage because Stef was struggling to accept her sexuality. They eventually divorced ten years before “Pilot.” In the pilot episode, he asked Stef to be his new partner, which caused some awkwardness for Stef’s current partner, Lena Adams. Despite this, Lena and Mike maintain a friendly and respectful relationship throughout the series.

He portrays Lieutenant Shepard, USN SEAL in the 1996 American action thriller film The Rock. Marines from the United States Force Recon steal 16 VX gas-loaded M55 rockets from a naval weapons depot. The following day, Francis Hummel and his men seize control of Alcatraz Island, kidnapping 81 tourists. The Pentagon and the FBI devise a strategy to retake the island using a Navy SEAL team led by Commander Anderson. Mason and Goodspeed defeat several Marine teams and disable twelve of the fifteen rockets by removing their guidance chips. Hummel’s men are detected and ambush them in a shower room. Mason reconsiders assisting Goodspeed after the Marines, having discovered the weapons and radio missing from Anderson’s second-in-command, begin using bombs to find the survivors.

He appeared as Fabrizio, Jack’s Italian best friend, who boards the RMS Titanic with him after Jack wins two tickets in a poker game in the 1997 American epic romance and disaster film Titanic. When the Titanic sinks, Fabrizio does not board a lifeboat and is killed when one of the ship’s funnels breaks and crashes into the water, crushing him and several other passengers to death.