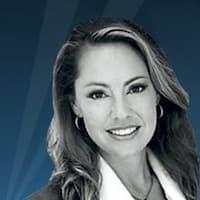 Claudia Cowan is a journalist from the United States working as a news reporter for the Fox News Channel. She has been Fox News Channel’s senior correspondent in San Francisco for over 20 years.

Who is Claudia Cowan’s mother? – Family

Cowan is the daughter of actress Barbara Rush and publicist Warren Cowan, co-founder of the global public relations firm Rogers & Cowan. Cowan’s father remarried Barbara Crane Gilbert Abeles Udko in 1995, and the couple remained married until Cowan’s father died in 2008. He had been her fourth husband.

How is Claudia Cowan related to melissa Gilbert?

Barbara Crane was the daughter of The Honeymooners comedy writer Harry Crane, and she adopted Melissa and Jonathan Gilbert of Little House on the Prairie with her first husband, actor Paul Gilbert. She is also the mother of actress Sara Gilbert, whom she had with Harold Abeles, but Sara took the family’s famous acting surname. Claudia Gilbert became a stepsister to Melissa, Jonathan, and Sara Gilbert when she was 32 years old.

Who is Claudia Cowan married to? – Husband

Cowan is divorced. She previously married sports agent Steve Baker, with whom she has twin children.

Cowan most recently provided live coverage of Robin Williams’ death in 2014, reporting from Tiburon, California. She also covered the deadly crash of Asiana Flight 214 from San Francisco International Airport (SFO) in 2013, as well as the anti-fracking movement in California.

Cowan has covered a wide range of stories for FNC, including the 75th anniversary of the Golden Gate Bridge, the death of American recording artist and singer Whitney Houston, the devastating wildfires in Southern California, and Californians’ reactions to Proposition 8’s unconstitutional ruling and the earthquake in Baja. She also covered the aftermath of Hurricane Dolly from the Texas/Mexico border in 2008.

Cowan previously worked in a variety of local markets, including KRON-TV (NBC 4) in San Francisco, KOVR-TV (CBS 13) in Sacramento, and KMST-TV (CBS 32) in Monterey. Her career began at KTTV-TV (FOX 11) in Los Angeles. Cowan, a University of California, Los Angeles graduate, is unmarried and lives in Sausalito.