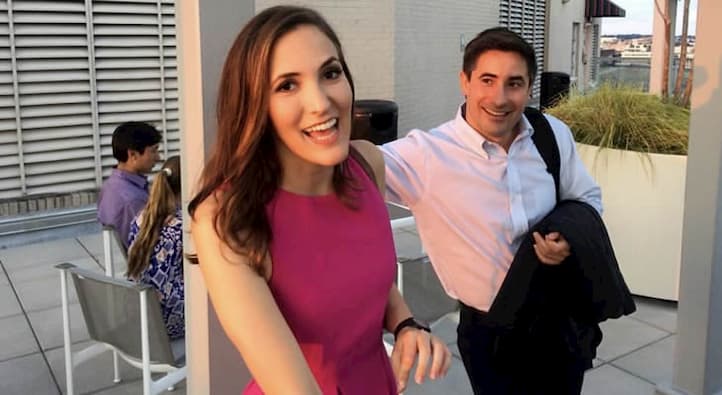 Betsy Woodruff Swan is a journalist who is a contributor for MSNBC and a national political reporter for the political journalism company, Politico. She covers reports on politics and policies in the U.S. Betsy is an American. Prior to joining Politico, Betsy also worked as a writer for the “Washington Examiner”, the “National Review” as a William F. Buckley fellow and “The Daily Beast”.

The Politico political reporter is 30 years old as of October 31, 2019. She was born in 1989 in Purcellville, Virginia, United States.

From Purcellville, Virginia, Betsy was born and raised by Jane and Scott Woodruff. She has two siblings: a brother, Chris Woodruff who is an executive director at Life Raft International, and a sister by the name Jane, a lawyer. Talking about her parents, Betsy has said that they helped her cultivate a strong work ethic with her father especially teaching her to work hard and play by the rules, always.

Betsy is married to Jewish and fellow national political reporter, Jonathan Swan, who works for AXIOS. The couple has been married on September 14th, 2019 and were engaged on March 11, 2018. Jonathan is an Australian who began his journalism career working for Fairfax Media.

A 2012 BA in English graduate from Hillsdale College, Betsy Woodruff began her career in journalism at National Review as a reporter and William F. Buckley Fellow. This she did while still studying at Hillsdale. She also wrote for the Toledo Free Press and joined the Washington Examiner in 2014 for an internship as a political writer covering electoral politics and Capitol Hill. In late 2014, she joined “Slate”, an online news magazine, still as a national political reporter.

In 2015, in March, Betsy got a job to work for the Daily Beast, an American news and opinion website. During her time at the Daily Beast, Betsy covered reports on immigration, justice and federal law enforcement. In 2016, she was also involved in the coverage of the Presidential election. In her career as a political reporter, she shares her opinions on matters affecting her country while covering hot stories involving the Capitol Hill. For her unwavering opinions on politics, Betsy Woodruff has appeared on Fox Business, CNN and MSNBC, being a contributor for the latter.

Betsy’s exit from the Daily Beast was announced on March 4, 2020 as she also announced of her new job at Politico.

Is Betsy Woodruff related to Bob Woodruff or Judy Woodruff

Many are the times when Betsy is believed to be related to Bob Woodruff and Judy Woodruff, who are also journalists. However, the three are not in any way blood-related. They just share the same name and are journalists.