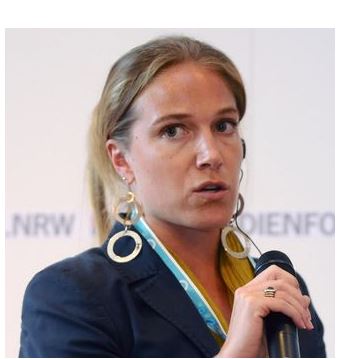 Arwa Damon is an award-winning journalist from the United States working as CNN’s correspondent based in Istanbul. She reports news from Lebanon and the surrounding region, with a special focus on the ongoing instability in Syria. She joined CNN in 2006.

How old is Arwa Damon? – Age

Her father is American while her mother is Syrian. Her grandfather Muhsin al-Barazi, is the former Syrian Prime Minister of Kurdistan, who was executed in August 1949 by the Syrian coup d’état. Damon and her family moved to Morocco, followed by Istanbul, Turkey, three years later, where her father was a professor and director of high school at Robert College.

She has tattoos that partly show under her rolled-up sleeves. She had been tattooed since starting a non-profit so she wouldn’t make herself give up. Her tattoos are Moroccan patterns of Henna since she grew up in Morocco. She’s got a big one up her ass. It’s a tattoo of henna.

She as an estimated net worth of $3 Million.

Damon has covered extensively the bloody violence in Syria, as well as the deepening humanitarian crisis that has erupted across the region. Any of her latest nation studies have centered on the impact of the destructive ‘barrel bomb’ airstrikes on the civilian population of Aleppo and the extremist Islamic rebel organization ISIS, who have set up an authoritarian Sharia state on the northern frontier with Iraq.

In 2013, Damon traveled to the Odzala National Park in Congo, where she filmed the documentary ‘Arwa Damon Investigates the Ivory War,’ following an elite team of rangers who track poachers who kill thousands of endangered elephants every year.

In April and October 2012, Damon was part of a team that received several awards for its coverage of the Arab Spring. She received the Emmy Award for Outstanding Live Coverage of the Current News Story, as well as the Peabody Award for ‘CNN’s Arab Spring Reporting including World Coverage: Egypt – Wave of Discontent and Uprising in Libya.’ In 2011, she wrote from Cairo on the Egyptian revolt against President Mubarak and Libya on demonstrations against Libyan leader Moammar Gadhafi.

Damon was based in Jakarta before Beirut, where she worked on Indonesia’s parliamentary elections and initiatives to deter the outbreak of the H1N1 flu virus. She has toured the forests of central Indonesia for the special documentary ‘Sumatra: Paradise Lost?’ ‘To uncover problems such as deforestation and the danger of extinction that humans face. It also covered Iraq’s 2010 elections, the Red Shirt anti-government demonstrations held in Thailand in 2010 and the Philippine elections, for which it interviewed President Benigno Aquino after his victory. It looked at the situation of Iraq as the US switched from the Iraqi Freedom operation to the New Dawn operation in a half-hour special in August 2010 and reported from Lebanon in October of the same year.

Prior to Jakarta, Damon was based in Baghdad and worked on seminal news, including the prosecution and execution of Saddam Hussein and two of his co-defendants, the elections in Iraq, and the referendum in Iraq. She covered the story of Youssif, a five-year-old Iraqi boy who was horribly burned in a violent and calculated assault. Her study attracted one of the largest reactions to a non-breaking news article in CNN.com’s history that, through the ‘Change The World’ program, enabled her to undergo medical attention in the United States. More recently, she came back to report on the influential documentary ‘Lnside Iraq: Living with the Enemy,’ which looked at an Iraq traumatized by its modern past, tried to explain the horrors of what millions of civilians have been through, and called the nameless victims.

Damon was also the first TV reporter allowed inside the Khamiya Women’s Prison to report on the dire plight of women behind bars. Its exclusive coverage covered an offensive to take back Baghdad’s infamous Haifa Street from Sunni extremists, while also chronicling the U.S. The battle of the army in Najaf against the Mehdi Army and the battles to recapture Samarra and Falluja. Prior to joining CNN, Damon spent three years reporting Iraq and the Middle East as a freelance producer for various news agencies, including Feature Story News (PBS) and CNN.