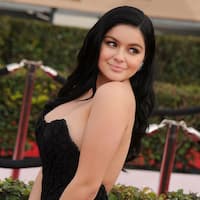 Ariel Winter is a well-known American actress who is best known for her role in the comedy series Modern Family. Winter and her Modern Family co-stars were nominated for four Screen Actors Guild Awards for Best Ensemble in a Comedy Series. She is also known for her work as the voice of Sofia the First in Disney Junior and Penny Peterson in the 2014 animated film Mr. Peabody and Sherman.

How old is Ariel Winter? – Age

Winter is the daughter of Chrisoula (née Batistas) of Greek descent and Glenn Workman of German descent. She is the younger sister of actors Shanelle Workman and Jimmy Workman. Winter’s sister filed for guardianship in October 2012, alleging that their mother was physically and emotionally abusive. Winter was removed from her mother’s guardianship on May 5, 2014. On May 15, 2015, Winter declared on Twitter that she was officially emancipated.

Winter is not married but is dating actor and singer Luke Benward.

She was cast as Sofia, a princess when her mother, Miranda, marries King Roland II of Enchancia in the American CGI animated children’s television series Sofia the First.

Sofia, a young girl, and her widowed mother Miranda have been peasants in the kingdom of Enchancia, with Miranda working as a shoemaker. King Roland, the widowed King of Enchancia, needed his shoes repaired one day and summoned Sofia’s mother Miranda. They met, fell in love, and married.

Sofia’s adventures as she adjusts to her new role as a princess are followed in the series. Roland gives Sofia an amulet, which she discovers can bestow blessings for good deeds or curses for wrongdoing. The amulet also connects “all the princesses there ever were,” urging them to assist one another in times of need. Cedric, the royal sorcerer, is a recurring primary antagonist.

She played the role of Marina the Mermaid, a young mermaid who lives in the ocean around Never Land with the rest of her people in the American musical and interactive preschool children’s animated television series Jake and the Never Land Pirates.

Marina is sweet, gentle, and kind to the young pirates, in contrast to some of the mermaids, who are snobbish, selfish, vain, and downright cruel. She frequently shows them the secrets of the Never Sea that she discovers. Marina and Izzy are best friends who might even be the same age. Marina has a younger sister named Stormy and a crush on Jake. The plot revolves around a group of three children, Captain Jake, Izzy, and Cubby, who are pirates in Never Land in search of treasure. Captain Jake and his crew count and deposit their gold doubloons in their treasure chest. Almost every episode includes two eleven-minute animated segments followed by a live-action song performed by the Never Land Pirate Band. The singing characters “Sharky” and “Bones” appear as members of Hook’s crew in both animated and live action forms.