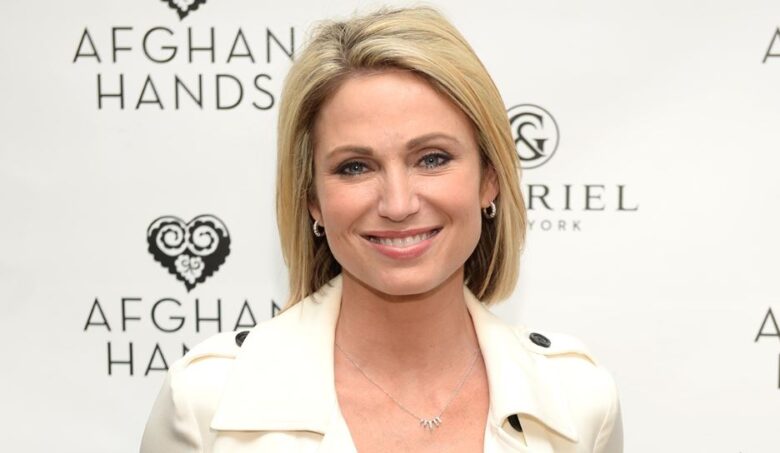 Amy Robach is an American journalist who is an anchor and correspondent working for ABC News. Robach is a co-anchor of the program ’20/20′ alongside fellow journalist David Muir and is the breaking news anchor/fill-in anchor for Good Morning America. Prior to joining ABC, Robach worked for NBC News as it’s national correspondent, anchor of MSNBC and co-host of NBC Today, Saturday edition.

How old is Amy Robach? – Age

Amy is the daughter of Joanie Robach, a former cook and was raised in East Lansing, Michigan before her family relocated to St. Louis, Missouri and again to Georgia. While living in Georgia, Amy attended her high school and college classes, graduating from the University of Georgia with a degree in broadcast journalism.

Amy is related to Matt Lindahl, a former Nashville Star contestant, who is her cousin. Amy took part in the 1995 Miss Georgia pageant and completed in the 4th runner-up position.

Yes, Ms. Robach is a married woman. She has been married twice with her first husband having been Tim McIntosh with whom she shares two kids. Robach and McIntosh were married from 1996 until they filed for divorce in 2008 and it was finalized in 2009.

Robach is now married to actor Andrew Shue. The couple met at a book party in April 2009, got engaged in September 2009 and married on February 6, 2010, at The Lighthouse at Chelsea Piers, adjacent to the Hudson River.

After graduating from college, Robach began her career in journalism at WTTG in Washington, D.C. In 2003, she joined MSNBC and was an anchor for two hours in the morning and was a fill-in anchor for ‘Countdown with Keith Olbermann’ and ‘Morning Joe’. She remained with the network for four years. For NBC, Amy co-anchored the show “Weekend Today” from July 2007 until May 19, 2012.

On the last day as co-anchor of Weekend Today, Amy announced that she would be joining ABC News. She began as a correspondent of Good Morning America on ABC. On March 31, 2014, Robach was named the news anchor of GMA and in 2018, she joined the show ’20/20′ as the new anchor.

Project Veritas reported a “hot mic” incident in late August 2019 in which Robach addresses ABC shutting down her report in 2015 about billionaire sex offender Jeffrey Epstein. The comments made by Robach came only two days after an NPR report exposed the presence of an on-camera interview with Virginia Roberts Giuffre and the failure of ABC to broadcast it. Giuffedre claims Epstein sexually trafficked influential men, including Prince Andrew, with her.

Robach announced on Good Morning America on November 11, 2013, that she had been diagnosed with breast cancer after having a live television mammogram on October 1, 2013, and after conducting follow-up examinations. After broadcasting, she took time off to undergo a bilateral mastectomy. Robach announced on November 22, 2013, that doctors discovered a second malignant tumor in her other breast during the surgery and that cancer had spread to her lymph nodes. She then underwent chemotherapy, radiation, and reconstructive surgery in eight rounds.

Robach is said to be earning an annual salary of around $1 million. As of 2020, she has an estimated net worth of $10 million.