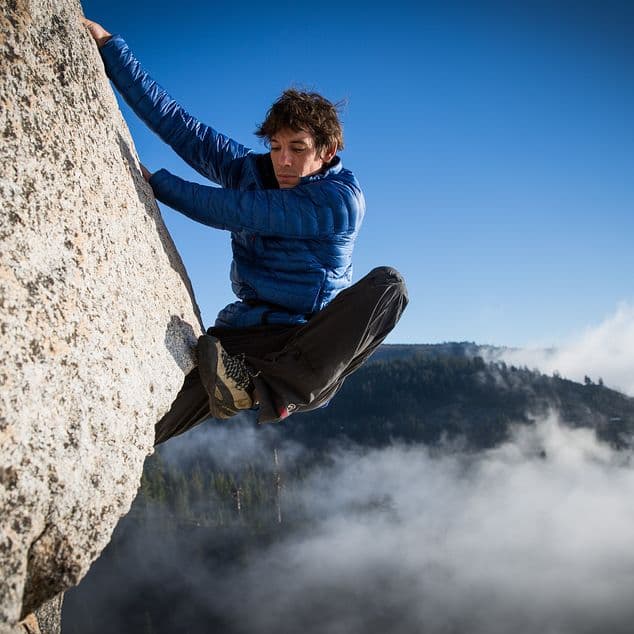 Alex Honnold is an American rock climber best known for his free solo ascents of big walls. He is the only person to free solo El Capitan in Yosemite National Park and holds the fastest ascent of the Yosemite triple crown, an 18-hour, 50-minute link-up of Mount Watkins, The Nose, and the Regular Northwest Face of Half Dome.

Honnold says he likes tall, long routes and that he tries to do them quickly. He is also the author (with David Roberts) of the memoir Alone on the Wall (2017) and the subject of the 2018 biographical documentary Free Solo, which won a BAFTA and an Academy Award.

Honnold says his inspiration is from such climbers as Peter Croft, John Bachar and Tommy Caldwell, and even more by beautiful sites like El Capitan in Yosemite National Park.

Honnold comes from a family of Polish descent. His parents are community college professors Dierdre Wolownick and Charles Forrest Honnold. He has no sibling. In his first year of college, Honnold’s parents got divorced and his maternal grandfather passed on. As a result of what he was going through, he skipped many classes to boulder by himself at Indian Rock.

Honnold’s wife is Sanni McCandless (Cassandra McCandless). The couple met in 2015 at a book signing and began their relationship soon after.

Honnold began climbing at the age of 5 in a climbing gym. He trained a lot and by the age of 10, he was climbing “many times a week.” As a teenager, Honnold took part in national as well as international youth climbing championships.

He attended the Mira Loma High School as part of the International Baccalaureate Programme and in 2003, he graduated from the institution. He joined the University of California, Berkeley, as a civil engineering student. His parents got divorced and his maternal grandfather died and all this took a toll on him. He missed so many of his classes and basically had no interaction with his schoolmates. Honnold chose to drop out of school and went back to live at home and continued doing climbing.

Honnold first gained attention when he did a solo of The Regular Northwest Face of Half Dome in 2012 which was featured in the film Alone on the Wall and an interview on 60 Minutes. On June 17, 2012, Honnold and Hans Florine set a new record of 2:23:46 (or 2:23:51) on the Nose route on Yosemite’s El Capitan. In November 2014, he lost sponsorship alongside four other climbers. This was because the company felt that the free solo form of sport was too risky and pushing boundaries.

On June 3, 2017, Honnold made the first free solo ascent of El Capitan, completing the 2,900-foot Freerider route in 3 hours and 56 minutes. The feat, described as “one of the great athletic feats of any kind, ever,” was documented by climber and photographer Jimmy Chin and documentary filmmaker E. Chai Vasarhelyi, as the subject of the documentary Free Solo. It won the Academy Award for Best Documentary Feature (2018), among other awards.

On June 6, 2018, Honnold teamed up with Tommy Caldwell to break the speed record for the Nose on El Capitan in Yosemite. They completed the approximately 3,000-foot route in 1:58:07, becoming the first climbers to complete the route in under two hours

After dropping out of university and going back to climbing, Honnold spent much time in his mom’s old minivan that he used to move around. It died on him one day and he later bought a 2002 Ford Econoline E150 van, in 2007. Soon, he was basically in the van as it enabled him to focus on climbing as it was easy to follow the weather.

♦  Alone on the Wall: Alex Honnold and the Ultimate Limits of Adventure. (co-authored with David Roberts)

Honnold has an estimated net worth of $1.5 million dollars.