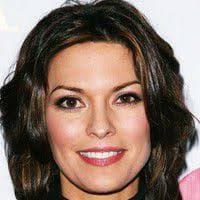 Alana de la Garza is an American actress best known for her roles in the NBC television series Law & Order: SVU in its final four seasons from 2010 to 2011, Law & Order: LA until the show’s cancellation in 2011, and Law & Order: Special Victims Unit.

Garza was born to a Mexican-American father and an Irish-American mother in Columbus, Ohio. She grew up in El Paso, Texas. Alana is a distant cousin of TV writer-producer René Balcer, with whom she shares a common ancestor, Juan Cortina, also known as the Rio Grande Robin Hood.

In the Miss El Paso Teen USA local beauty pageant, she was crowned “Miss Photogenic.” She went on to become a special-needs teacher and attend the University of Texas at El Paso, where she studied physical therapy and social work. After graduation, she landed a few minor roles while living in Orlando, Florida, before moving to New York City.

On May 31, 2008, Garza married writer Michael Roberts, in Orlando, Orange County, Florida. They have two children: a son and a daughter.

He was cast as FBI Special Agent in Charge Isobel Castile in the American crime drama television series FBI: Most Wanted.

The show follows the members of the FBI’s Fugitive Task Force, which is led by Supervisory Special Agent Jess LaCroix, a skilled tracker, and profiler. Kenny Crosby, a former Army Intel vet whom Jess mentored; Sheryll Barnes, an ex-NYPD detective; Hana Gibson, the team analyst; Clinton Skye, a marksman with a law degree and Jess’ brother-in-law; and Ivan Ortiz, a former LAPD gang officer who worked for the FBI’s counterterrorism unit. They work together to track down and apprehend dangerous fugitives on the FBI’s Most Wanted list. The show differs from its namesake in the following ways: On Most Wanted, the identity of the suspect is usually revealed at the beginning of the episode. The primary focus of the show is the Manhunt, as opposed to the FBI, which focuses on the investigative aspect of law enforcement.

Seger is an intelligent, well-traveled, and multilingual cultural anthropologist and IRT special agent. Prior to rejoining the IRT in October 2015, Seger was married to Brad, a fellow agent who, like her, knew Jack. After her husband Brad died in 2013, she took a sabbatical from the FBI and traveled around the world.

She was cast as Connie Rubirosa; a Deputy District Attorney in the American police procedural and legal drama television series Law & Order: LA.

She was cast as Special Agent in Charge (SAC) Isobel Castille, Mosier’s replacement as the team’s supervisor in the American crime drama television series FBI.

The series focuses on the inner workings of the Federal Bureau of Investigation’s New York office (FBI). In major cases, this elite unit brings all of their talents, intellect, and technical expertise to bear in order to keep New York and the country safe. Special Agent Maggie Bell, who was born into a multigenerational law enforcement family, is deeply committed to both the people she works with and those she protects. Special Agent Omar Adom “O. A.” Zidan, a West Point graduate from Bushwick who spent two years undercover for the DEA before being hand-picked by the FBI, is her partner. Dana Mosier, Special Agent in Charge, is in charge of them and works under extreme pressure. Kristen Chazal is the most valuable member of the team. Stuart Scola, a former Wall Street trader turned Special Agent, joins the team and works alongside Kristen. Kristen transfers to Dallas, Texas, at the start of Season 3 and is replaced by Tiffany Wallace.